Of all the mobile gadget makers, Asus reminds me of the toys of my youth such as Erector sets. Asus has an affinity for creating hybrid devices with components that snap in and out of each other. The Transformer series of laptops and notebooks obviously plays on this transforming toy theme with the name Transformer, and there is also the PadFone series, where a smartphone snaps into a Tablet base to become, well, a Tablet. In addition to announcing new models in its Transformer series of Tablets today at CES 2014, Asus also announced new models in its PadFone series of hybrid devices. 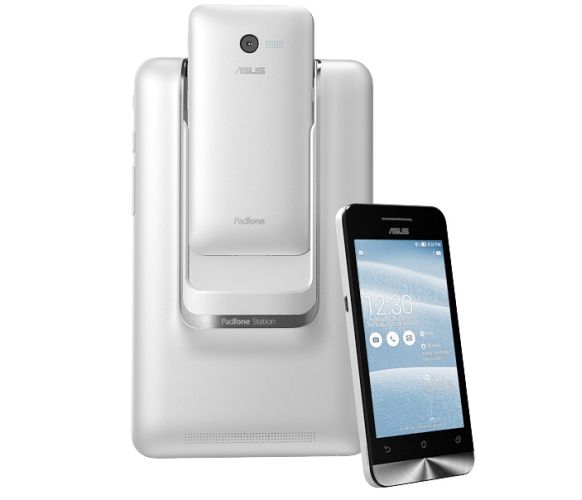 The PadFone Mini follows the road map Asus has created with the PadFone series, with this 4 inch smartphone snapping in and out of a 7 inch Tablet base. The smartphone portion powers the entire device when they are mated. The PadFone Mini will feature an Intel Atom Z2560 processor and 1GB of RAM along with 8GB of storage. There is a microSD card slot and dual cameras (8MP rear and 2MP front). At launch Android 4.3 will be on board, but Asus says an Android 4.4 update will arrive in the future.

Asus says the PadFone Mini will connect at HSPA+ speeds and includes dual SIM capability. The phone portion of the device will feature a 800 x 480 pixel IPS display, while the tablet has a 7 inch, 1280 x 800 pixel screen.

The PadFone Mini will cost $249 when it ships in the US. A previous PadFone mini 4.3 never shipped in the US. Like many Android smartphone makers, Asus will feature its own UI, the Asus ZenUI which sits on top of Android, and offers simplified menus and icons in addition to a “What’s Next” feature that shows users future events. The ASUS Dynamic Display technology will automatically resize apps for either the 4- or the 7-inch screen. The PadPhone Mini will come in black, red, white, blue, and yellow.

No release date has been set yet. Asus also announced the AT&T exclusive PadFone X, which we will report on in a separate post.