Chuong Nguyen caught up with Andy Lusky of AMD at CES 2012 and got a quick look at something Ultra. Well, that’s Ultra as in Ultrathin not Ultrabook. Given that everything with the word Ultra attached to it these days usually has thin attached, this Asus Ultrathin notebook has a few things that might be of interest. 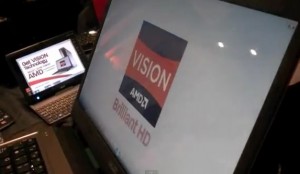 For starters its powered by AMD with its A series APU. This puts the CPU and the power of a Radeon GPU all on one chip. Now that of course means it’s not running the Ultrabook spec, so obviously this is AMD’s attempt at getting into this “Ultra” market that we’ll all be talking about for some time to come. (What comes after Ultra? Ultra-Ultra? Super Ultra? Does anyone know?)

Next up is a sub-$500 price point when it hits the US at some undefined point later in the year. (It’s available in China now.) From the description in the video this looks to be targeted at the price conscious and gamers given that Asus is touting performance, graphics frame rates, and battery life. And we all know that market exists. It also looks like AMD isn’t taking the whole Ultra Book spec from Intel lying down.

Note that we’re just seeing a demo here, so Chuong here’s a question. Did you get to go hands on? Any comments on performance?