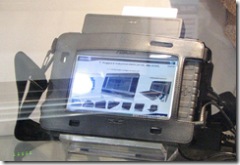 Some more news out of Computex, this time from Asus.

Asus debuted a 7 inch rugged UMPC called the Hermes. It uses a C7-M processor chip from Via Technologies, is fan-less, meets the MIL-STD-810F shock-resistance standard, and is water proof. The screen can either be backlight from a fluorescent tube or LED. The model displayed a CompuTex had a harddrive, but according to Tech-On, Asus plans on offering an SSD version, too.

Look for this UMPC in the fall of 2007. The standard version of the Hermes will sell for around $700.

Expect for this product to show up from other OEMs / ODMs as a different brand name, as well as from Asus directly.