If you remember the Asus roadmap which contained about a gazillion future versions of the triple vowel ultra-portables, there was indeed an ultimate version up there near the top. Well, Asus has unveiled the Ultimate Eee, although it is eventually going to lose the Eee label when it ships according to reports, which is a confusing bit of branding. 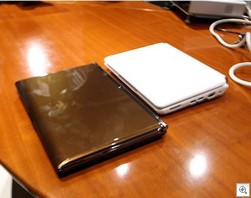 The Ultimate S101 will have a 10.2 inch screen with a backlit display and either a 32GB or 64GB SSD (depending on which source you’re reading and what price you’re paying). It is running a 1.6GHz Atom chipset and supposedly is going to be priced between $699 to $899. Focusing on thin, at the unveiling Asus president Jerry Shen did the old ultra-portable out of the envelope trick. And it is brown.