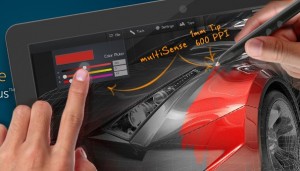 Devin Coldewey at TechCrunch has penned an interesting article entitled In Defense of the Stylus. It’s a nice history lesson in this age where the stylus is constantly derided, and worth a read for that point. I happen to agree with his conclusion. A stylus, like the wheel and the wedge is something that has been around for some time, been constantly reinvented and isn’t going anywhere. But currently technology is holding us back a bit with the stylus and when technology catches up to it can become really useful in the digital age as opposed to being something that is a target of derision.

The post is also worth taking a look at because it mentions a new active stylus by Atmel, a maker of touch screens, and the approach that company is taking to make a stylus. Long time Tablet PC owners will see this as pretty familiar territory, but it is worth a look-see.

Here’s a description from the Atmel site:

Atmel’s solution is a marriage of technology between the screen and the pen which they called the MaXStylus, that allows simultaneous touch and stylus input that work together in concert.