AT&T is finally rolling out a real 4G  network, which has just gone live in Chicago. This time around, AT&T doesn’t need to pretend that adding 4G means the same thing on any carrier, and can actually call the advanced network 4G LTE.

The first speed tests are showing up online come via Boy Genius Reports, and show marked improvement over the current speeds you can get on AT&T’s 4G* network, but don’t compare to favorable with Verizon’s 4G LTE network which has faster speeds and more coverage.

The tester used the AT&T Elevate 4G LTE mobile hotspot in several locations to test speeds on his iPhone and a Macbook Pro.

The speeds shown below look great compared to 3G, but are slower than Chicago testing performed recently on Verizon’s network. 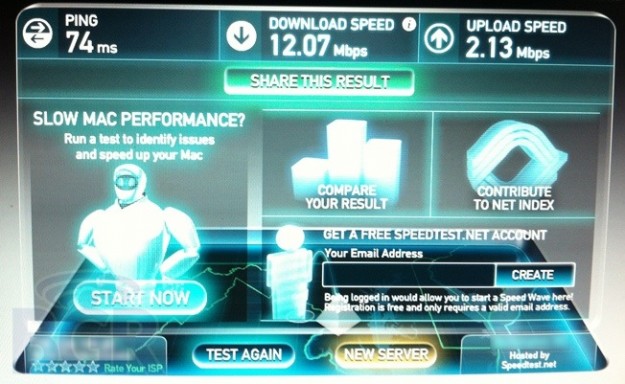 Keep in mind, this is early and the tester reportedly only had 3-bars of service, and the network hasn’t launched yet, but still I’d expect to see some faster speeds with no one else around to hog the network.

For comparison, the following speed tests were run recently on the AT&T HSPA+ network and on Verizon’s 4G LTE network.

Here’s how things stack up.

As you can see, the Verizon 4G LTE network is still ahead of the game in terms of speed. We’ll have to wait and see how AT&T stacks up when it finally launches 4G LTE coverage officially.

These new speeds should be plenty fast for smartphone users on AT&T, but if I were using my phone as a hotspot or getting a 4G LTE hotspot, Verizon would still be my first choice.