AT&T has officially admitted defeat in its ongoing data throttling lawsuit brought on by an iPhone owner who claimed that the carrier unfairly throttled his data after advertising an unlimited data plan. A small claims court judge had previously ruled in Matt Spaccarelli’s favor and today, AT&T decided to pay up awarding Spaccarelli with a $935 settlement.

The carrier had originally planned to appeal the judge’s ruling but it was just a few days ago that we learned that it was, in fact, seeking to reach a settlement with Spaccarelli over the case.

Today, Spaccarelli tweeted a photo of a $935 check, courtesy of AT&T, which covered the $850 judgement and $85 for court fees. 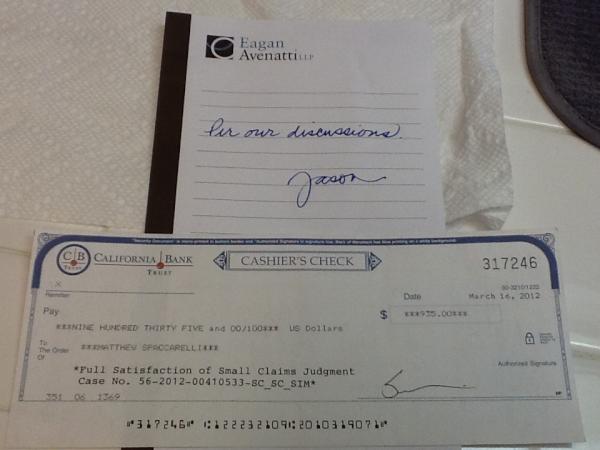 The ruling was likely the reason that AT&T finally decided to come clean about its throttling policy. Before the start of March, AT&T only said that it was throttling the top 5% of data hogs. Only, it wouldn’t show the threshold that users had to cross to be subject to slower speeds.

At the beginning of March, AT&T made the details public and announced that those grandfathered on an unlimited data plan were subject to a 5GB threshold with a 4G LTE data plan and 3GB when using HSPA+ 4G or 3G.

For Spaccarelli’s part, he says that AT&T is still throttling his data speeds with his weekend download speeds as low as .31Mbps .

He also plans on using the money won in the case to buy out of his contract with AT&T before his contract is up.