I’ve spent a lot of time complaining about AT&T’s service ever since I bought my first iPhone three years ago. It’s been all but impossible to reliably place calls from my home in the middle of San Francisco, even when using a zBoost extender. But something changed yesterday. My iPhone 4 is now displaying five solid bars, calls are crystal clear and 3G connection speeds are blazing fast. After three years of dropped calls, garbled calls, incoming calls going straight to voicemail and having to call people back from my landline, I finally have genuine 3G coverage.

I bought a pair of iPhone 4s on June 24 and was really hoping the new antenna layout would be a positive. While my wife and I have enjoyed many of the new features, we were both very disappointed with call quality. The reception was notably worse than what we experienced with our old iPhones. You could chalk it up to the iPhone 4 antenna issues, software problems or all the new iPhone 4 owners jamming the network for the first several days after launch, but whatever the cause it was an awful experience that left us using our landline and T-Mobile phones much more than previously. 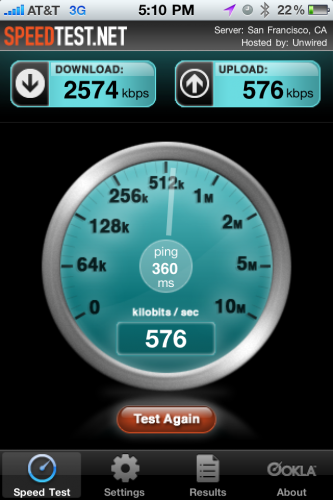 This morning my iPhone 4 rang and I answered it. Surprisingly, the voice on the other line was crystal clear. We talked for over 15 minutes and said our goodbyes without a hitch. I thought it was a fluke at first and that the five bars of 3G were of the fake variety, but call quality held up all morning. I switched off my zBoost and calls continued to come in clearly. I ran a series of Speedtest.net tests and  was shocked to see solid upload and download speeds. As I write this, it’s difficult for me to believe that the above screen capture was actually taken from my iPhone in my home. What’s even more difficult to believe is that I can surf the web, stream music and download apps via 3G. Of course I’m usually on my home network, but I’m pretty confident the solid reception extends beyond our walls and throughout our neighborhood. Ironically, the improved reception here in SF emerged as AT&T customers in many metro areas saw their data rates decrease suddenly.

I did buy a Bumper case for my iPhone 4 over the weekend and at first I thought that the improvement was due to the case, but I was able to duplicate the speedtests and place clear calls with the case removed. My wife worked from home today and she too was able to place and receive calls reliably with her Bumper-less iPhone 4.

AT&T is apparently making good on its promise to improve its network in the San Francisco area. I know my results are anecdotal at best, but it sure feels nice to be on the positive end of the AT&T network quality spectrum for a change. The contrast between my AT&T reception prior yesterday and now can only be explained by a serious adjustment to nearby towers or the placement of a new tower or two in my neighborhood. T-Mobile has been installing compact towers on telephone polls in the neighborhood and I’m guessing that AT&T’s followed suit. There’s a lot less red tape to get through to install a tower on a telephone poll than on top of a building in San Francisco. There are a lot of people in San Francisco that protest loudly whenever carriers try to install towers in permanent structures.

The improved reception at home means more to me than any new iPhone 4 or iOS4 feature. While I’m not happy with AT&T for the three years of horrible service at home, I’m very grateful for the improvements. Hopefully, we’ll see a lot more dead zones in the San Francisco Bay Area lit up with solid 3G service. When I can go an entire day without a dropped call while driving around Silicon Valley I’ll finally feel like I’m getting my money’s worth.