Both AT&T and Verizon have expanded their high-speed 4G LTE networks today.

Verizon expanded its 4G LTE network in 34 new markets today while the network has also become more widespread in 38 other markets. That expansion brings Verizon’s 4G LTE grand total to 370 markets here in the United States, making it far and away the carrier with the largest 4G LTE footprint.

AT&T on the other hand has some catching up to do. However, the carrier has taken another step in that direction today by expanding to five new markets today bringing its total 4G LTE footprint up to 53.

Both carriers plan to complete their 4G LTE roll outs by the end of 2013 though it’s clear that Verizon will very likely complete its roll out much sooner than that. 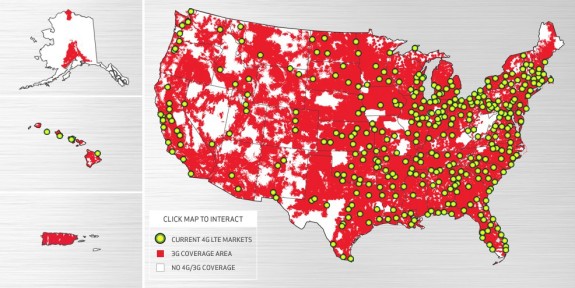 AT&T and Verizon have expanded their 4G LTE networks.

AT&T has brought 4G LTE access to five new markets that include Fayetteville, Springdale, Rogers, and Bentonville, Arkansas. It has also brought service to Waco, Texas.

This means that customers in those areas can now utilize 4G LTE devices like the Samsung Galaxy Note and Nokia Lumia 900.

4G LTE data speeds can reach up to 10 times faster than those found on a typical 3G network.

As for Verizon, it has launched its network in 34 markets. They include:

Markets that will see 4G LTE service expand today include:

With the new expansion, Verizon’s 4G LTE network now covers over 75% of the the population in the United States.

AT&T and Verizon’s other competitors, Sprint and T-Mobile, are way behind the pack. Sprint launched its 4G LTE network in July and thus far, the network is only available in 15 areas around the U.S.

T-Mobile is even further behind as the carrier has not yet launched its 4G LTE network and won’t be doing so until sometime in 2013.