It looks like AT&T is making good on its promise that if you’re among the top 5% of data users on its network, you’ll most likely be throttled to reduced speeds for the duration of your billing cycle. The carrier had stated that the policy change will go into effect at the beginning of October and that only those who were grandfathered into unlimited smartphone data plans would be affected. Heavy data users are now beginning to receive text messages from AT&T to warn them that their data use is high, placing them in the top 5% of users, and that they should switch to WiFi. 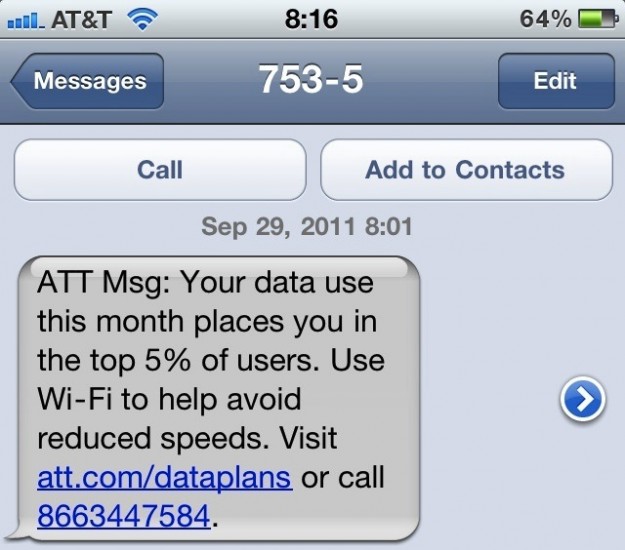 According to a user on 9-to-5 Mac who received the courtesy message from AT&T, he is now up to 11 GB in data transfers per month.

Currently, of the major 4 national carriers, Sprint is the only carrier to not throttle data speeds and still offer an unlimited smartphone data plan. AT&T and Verizon have grandfathered existing customers to unlimited plans, but have begun to tack on throttling provisions. New subscribers are on finite and metered plans where there are overages for both customers. T-Mobile USA has unlimited plans, but you pay for the amount of data you want at faster 3G/4G speeds; once you exceed the bucket, you’ll be throttled down for the remainder of the month though you won’t be assessed overage fees.