Just when we thought AT&T’s iPhone 5 order process couldn’t get any worse, it appears that it’s now sending out emails in error telling iPhone 5 owners who have already received their device that it’s working hard to fulfill the order but that extraordinary demand is complicating matters.

Last week, we detailed just how poor the AT&T iPhone 5 order process was for some people. On pre-order day, AT&T’s website was difficult to use because of the heavy load. Soon after, some customers, myself included, starting living an iPhone 5 pre-order nightmare as AT&T started spewing out all sorts of emails all (or in my case, none at all) while its website provided little clarity.

As I wrote last week, AT&T needs to overhaul its iPhone pre-order process for the next iPhone.

Read: When it Comes to iPhone Pre-Orders, AT&T Needs to Do Better.

And that argument got validation today as a reader sent in an email that he just received from AT&T telling him that his iPhone 5 pre-order was not available for shipment due to high demand.

Only, he already received his iPhone 5 from AT&T, last week, on September 21st. 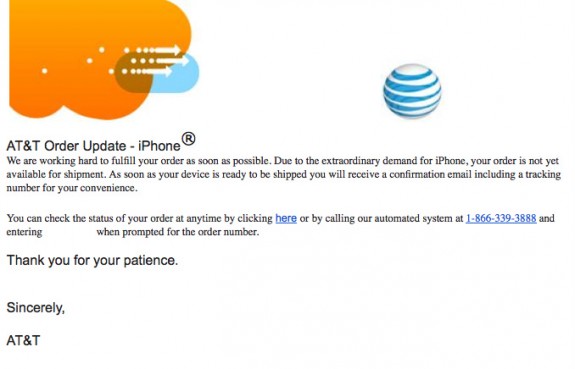 AT&T has told at least one new iPhone 5 owner that his phone is still being prepared for shipment.

It’s certainly possible that he is the only person who already received his iPhone 5 that received this email from AT&T but we wouldn’t be shocked to hear that other iPhone 5 owners are receiving this email as well.

We also assume that AT&T is sending this email out to people who are legitimately still waiting as well.

In any event, the iPhone 5 is currently on back-order at AT&T with pre-orders shipping out in 14-21 days. We’re assuming that the next batch of iPhone 5’s should start heading out next week to those who pre-ordered last Friday given that the two week mark is next Friday.

The iPhone 5 was released last Friday and in one weekend, Apple sold 5 million units. The device features a larger 4-inch display, 4G LTE data speeds, a faster processor and iOS 6.