AT&T can’t deliver emergency alerts to the iPhone 5 and other smartphones on its 4G LTE network according to All Things D.

As people in the Northeast prepare for Winter Storm Nemo many received emergency notifications about the blizzard on their smartphones. Photos of the message flooded Twitter as soon as it appeared on iPhones yesterday. Except none of those messages came from iPhone 5s on AT&T.

AT&T support emergency notifications on its older “4G: HSPA+ network, but can’t send the notices to users on its 4G LTE network. So while iPhone 5 users on Verizon and Sprint jumped because of the sirens coming from their phones, AT&T iPhone 5 users heard nothing. 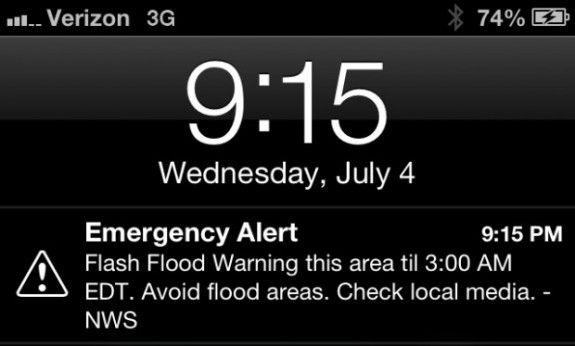 All major national carriers currently support the emergency notification system. AT&T is the only one that doesn’t support the feature on its 4G LTE network so far. Hopefully the carrier can expand its support for the system before the next major storm or emergency.