At the BlackBerry Q10 launch event in Los Angeles, California, AT&T celebrates Elevate Young Black Voices with a flash mob that introduced Cee Lo Green and Goodie Mob on the red carpet. The event not only showcased the latest technology from BlackBerry in the form of the keyboarded Q10 launch, but also helped AT&T highlight the diversity in the Southern California region with the Elevate Young Black Voices winners. 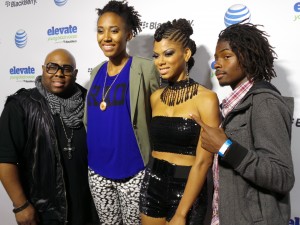 “The contest gave four talented singers the opportunity to win a two-hour private mentoring session, and perform live with the group during the finale concert at Hollywood nightclub, Playhouse, in front of friends, celebrities, and VIP guests,” the Rethink Possible network and BlackBerry wrote in their joint press release. “In honor of June’s Black Music Month, AT&T and BlackBerry collaborated to develop the contest that encouraged aspiring solo artists to upload a video of an original song that is inspiring and motivational to the African-American community.”

As part of the contest, the four winners got a special musical mentoring session with Cee Lo Green and the Goodie Mob in Los Angeles’ Boom Boom Room. 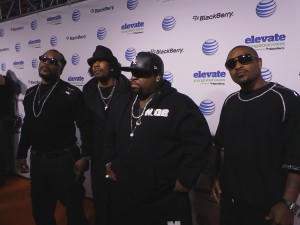 The four aspiring solo artists, Justice Ami from Palmdale, Calif.; Kno’Bodie, from Inglewood, Calif.; Rahkua, from Jackson, Miss.; and Eveready, from Kansas City, Mo.; showcased their talent individually, and then joined the stage with Goodie Mob to perform CeeLo’s hit song, “Forget You.”

The flash mob was a red carpet sensation that featured young Hollywood celebrities Cassie Scerbo and Josie Loren along with some of their talented dancer friends, including Brittny Sugarman, Todrick Hall, Kane Silver, Sarah Blades, Jennie Thompson, and Jyson Tucker. AT&T’s flash mob helped to introduce Cee Lo and his team onto the red carpet, where Goodie Mob and the Elevate Young Black Voices finalists performed inside the Hollywood Playhouse to awaiting guests.

Other celebrities in attendance include Vivica A. Fox from Kill Bill, Sister Sisters and You Got Served star Marques Houston, model Phoebe Price, Joey Adams of Chasing Amy fame, and Kate Mansi, and Ari Zucker from Days of our Lives.