If you have watched any amount of TV in the past month you will have seen an AT&T commercial featuring a lone flashmob dancer in a busy train station. The ad is designed to tell you why you need AT&T’s 4G network, but instead of delivering a funny, the ad shows that AT&T needs to figure out what it’s 4G network is good for. 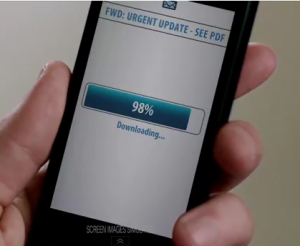 Rather than show off an activity that benefits from high-speed 4G download speeds, AT&T decides to opt for an email with attached PDF. This isn’t your ordinary email though. Unlike the email messages sent on pretty much every device, this poor soul has an email client that won’t let him read the text until a large PDF downloads.

Why is AT&T trying so hard to deliver a fast dose of comedy instead of showing off what you can do with a 4G connection? The answer is simply that AT&T doesn’t have the network or speed to back it up.

AT&T has already been caught slowing down uploads, which means it would have taken the sender longer to send the media rich notice and the current download speeds still drop in close to 3G for many users, which means the poor sap would still be dancing by himself.

Rather than trying to be cutesy and crafty, we wish AT&T would focus on showing what you can actually do on their 4G network when they aren’t slowing down speeds and causing premature flashmob dancing of their own.

Hopefully AT&T will follow-up with a commercial like Verizon’s 4G spot which shows off what you can do with 4G in a setting where speed matters.

By this point you’ve probably picked up on the fact that I have issues with commercials that don’t match up with real world use. If that bothers you, trust me, you wouldn’t want to watch a movie with me.