The Samsung Galaxy Note 2, which is the premier 5.5-inch phablet in the United States, may be getting a rival soon, at least on AT&T, in the form of the 5.5-inch LG Optimus G Pro which may have passed through the FCC on its way to AT&T’s network.

Read: T-Mobile Galaxy Note 2 Deals Lead to Near Sell Out.

As it stands, the Samsung Galaxy Note 2, Samsung’s massive smartphone is without many true rivals in the United States. However, it may soon have to face a true threat in the form of the LG Optimus G Pro, a device that hasn’t landed yet in North America but will be arriving at some point in the second quarter of this year. 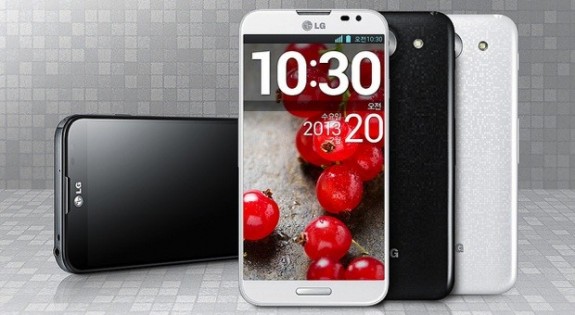 The Galaxy Note 2 may soon have to battle the Optimus G Pro on AT&T.

Carriers, pricing and release dates other than Q2 are not yet known but it looks like an FCC filing, discovered by Engadget, points to a possible release on Ma Bell in the future. The filing showcases a device called the LG E980 which is thought to be the LG Optimus G Pro. The 4G LTE device comes with bands that are used for AT&T’s network which seem to hint at a release in the future to compete with AT&T’s Galaxy Note 2 variant.

Given AT&T’s past release of the LG Optimus G, it should come as no surprise that the carrier might be looking to offer the larger version of one of its better Android smartphones.

Just when the device might touch down is unknown but Q2 spans the length of April, May and June which means that it could be out at any point in the next three months.