AT&T Goes on Offensive Against T-Mobile With New Ads

After a short lived friendship when the two carriers tried to merge, AT&T Mobility is now going on the offensive against smaller GSM carrier T-Mobile USA. In a new ad that has appeared in some of the nation’s largest news publications, AT&T is advertising ‘the truth about T-Mobile’s network’ and compares T-Mobile’s call quality and data performance against its own. 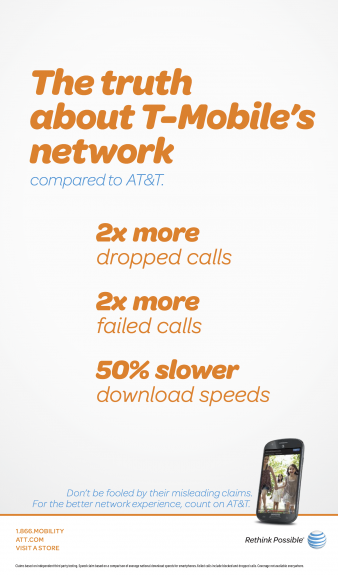 AT&T’s ad comes just as T-Mobile is beginning to roll out its 4G LTE network. Once the esteem network for customer satisfaction, it’s unclear if T-Mobile’s recent woes are related to its LTE deployment. When Verizon rolled out LTE, the self-proclaimed ‘nation’s most reliable network’ had periods of unreliability with a few outages.

Additionally, T-Mobile is also speculated to be getting the iPhone this year. Possibly, network problems may be signs that T-Mobile is performing network upgrade and maintenance to prep for the launch of the iPhone, which is expected to consume more bandwidth. When AT&T first offered the iPhone in 2007, it wasn’t known to be the speediest or most reliable network. In fact, AT&T’s satisfaction rating plummeted as its network was overburdened with the extra traffic from new iPhone customers. Fortunately, since then, the carrier has invested heavily in its infrastructure and its LTE network speeds are now among the fastest in the country.

T-Mobile is now in talks to be merging with MetroPCS in the U.S.