AT&T iPhone pre-orders have begun to ship out as many customers who pre-ordered their iPhone 5 through AT&T have received shipping information that will allow them to track their shipment prior to its arrival tomorrow.

We received numerous tips this morning indicating that lots of AT&T customers saw activity with their order over night and that AT&T updated their website with tracking information for those that will indeed receive their iPhone 5 tomorrow. 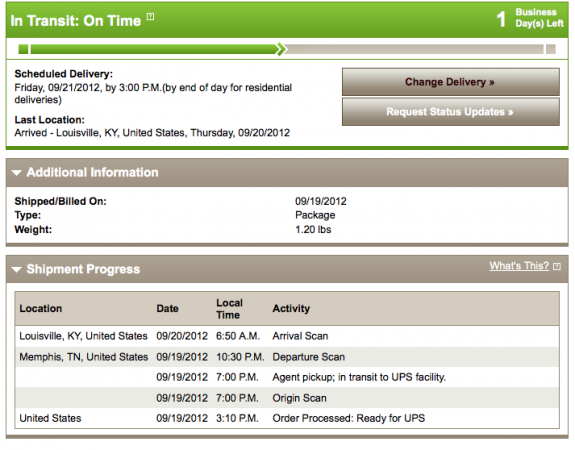 iPhone 5 pre-orders through AT&T have begun to ship.

What this means is that those who haven’t received a tracking number from AT&T, whose orders are still processing, will likely not see their iPhone 5 arrive tomorrow. That group could include plenty of people that pre-ordered last Friday, the first day that the iPhone 5 became available for pre-order.

If that’s the case, the second wave of iPhone 5 pre-orders should ship out anywhere between 14 and 21 business days from now. That means a two week wait at the very least.

Those who pre-order today will get, according to AT&T’s website, the same kind of wait time. We imagine that the shipping times could be pushed back if those who aren’t able to score one in-store tomorrow head back home and order online instead.

So, it would appear that for many, the dust is now settled and the new iPhone 5 will be on the doorstep tomorrow. UPS says that it will be delivering devices by the end of the day for residential deliveries, FedEx has a similar policy, so many of those who pre-ordered through AT&T may not see their device arrive until late in the day.

In other words, if it doesn’t arrive in the morning, remain patient and keep an eye on its progress in the carrier tracking.

Who else is getting their iPhone 5 tomorrow?