After receiving hundreds of emails from frustrated customers in regards to the AT&T iPhone 5 pre-order and after going through the experience myself, it’s clear that AT&T needs to do better when and if it offers a pre-order for the iPhone 5S or iPhone 6 next year.

After about 45 minutes of clicking, hitting back on my browser, and entering pertinent information over and over again, my pre-order stuck and I was now the owner of a new iPhone 5. Oddly enough, AT&T never, for whatever reason, sent me a confirmation email. It did however send me a nice text message which you can see below. 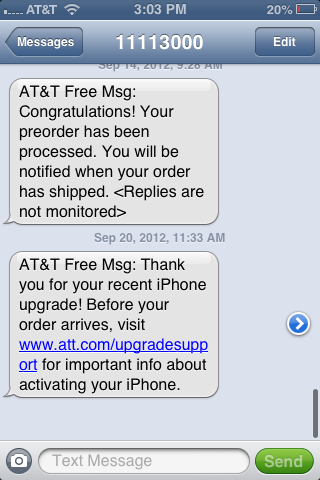 That test message at the top was one of the only pieces of information I had about my order.

After enjoying a nice relaxing weekend as a future iPhone 5 owner, I woke up on Monday morning to an email from a reader (and not AT&T) saying that the carrier had mysteriously pushed his iPhone 5 order back from the original September 21st delivery date to 14 to 21 business days from then. Flustered, I did a little investigation of my own.

And that’s when I discovered that AT&T was of absolutely no help in regards to anything iPhone 5 pre-order related. Starting with its website which offered me nothing in terms of information.

Until yesterday morning, my order said it was processing. I didn’t have any tracking info. I didn’t have any scheduled delivery date. Nothing. It just said processing. Then, a little later in the day, the website claimed that my device had shipped. Still, the carrier providing nothing in terms of information. Great, it shipped. But was it on time? Who was delivering it and when? These are questions I wanted to have answered.

But who to answer them? Well, AT&T states this right above my order:

Here are the details on your order. If you have questions, we’ll be glad to help. You can chat with an agent live or contact us.

So, then I started the hunt for any email from AT&T.

Like I said, a reader emailed me saying that his order had been pushed back. And soon after, it became apparent that AT&T sent the email out by accident and that his order was actually coming on September 21st.

Others received emails saying that they would be notified when the device shipped. Oddly enough, I never received an email from AT&T about an expected shipping date. Not even one offering misinformation.

In fact, this entire time, I haven’t received a single email from AT&T about my iPhone 5 order. And others, who had received emails previously, said that  AT&T did not email them telling them that their order had shipped as it had promised. Most people discovered the news and their tracking number either through UPS or FedEx or through AT&T’s website.

The funny thing is, my friends and co-workers who pre-ordered through Apple, Sprint and Verizon don’t have any horror stories of their own.

After years and years of taking orders for the iPhone, you’d think AT&T would have this all figured out by now. That its website would offer up-to-date information, that its customer service reps would be well-equipped, and that it wouldn’t be sending out false emails or no emails at all. You’d think after all of the nonsense, that they’d do something to change or improve its system.

Hopefully, in the next year, it makes the necessary changes. A great ordering experience and fantastic customer service to boot would go a long way with customers torn.