Yesterday, when Apple announced that the new iPad 3rd generation now has 4G LTE capability, many rejoiced. And when Tim Cook said that the iPad is capable of being a mobile hotspot, they turned the excitement up to 11. However, what he did not say is that the carrier partners involved would actually offer that service.

Yes, there is a difference between “The iPad can do that” and “You’ll be able to do that with the iPad.” For iPhone owners, this is a familiar song.

After a bit of initial confusion and conflicting statements, we confirmed with Verizon Wireless that they are offering the mobile hotspot feature to customers who buy a Verizon model iPad at launch. However, AT&T will not.

According to this tweet from @ATTCustomerCare, this feature is a no-go right now. 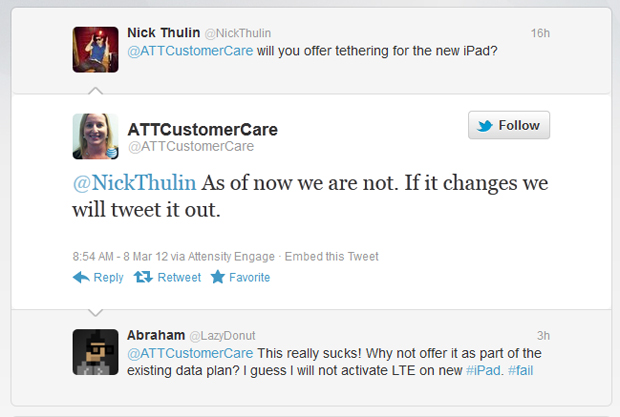 I reached out to AT&T’s media contacts several times to get a confirmation since sometimes the people running the Twitter accounts don’t always have accurate information. However, none of the representatives I contacted replied to that question even though they have replied to others.

Update: Apple Insider says that an AT&T rep says they may enable the feature “in the future.”

If they get around to enabling tethering for their iPad customers, it’s likely that users will only be able to access the feature at the 5GB tier since that’s the way it is for smartphones now.

Meanwhile, Verizon Wireless is not only down with the mobile hotspot, they’re not making customers pay extra for it.

So if you want tethering on your iPad, right now, Verizon is the only choice.