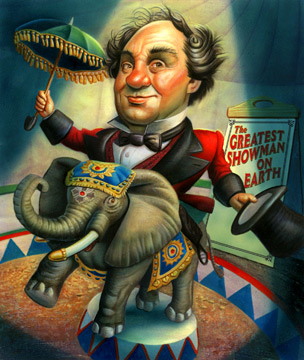 I guess there’s got to be some advantage to being a Telco descended from Ma Bell. I can’t imagine another corporation that could survive the number of times that AT&T has shot itself in the foot since becoming the exclusive carrier for the iPhone and then the iPad. It’s one thing to make missteps, leave broken promises in your wake, and have to change course. It’s another when you become too easy targets for national comedians and TV talking heads. What’s even more puzzling is that Apple lets AT&T get away with it as do most consumers. It is quite telling. Consumers are either so smitten with their iDevices, or else AT&T and Apple are capitalizing on P.T. Barnum’s maxim that “there’s a sucker born every minute” in ways that Barnum could only have imagined.

Let’s set aside the chronic network woes (even though they lead to much of the current sloppiness) and just accept AT&T’s word that they can’t provide the demand that they continue to advertise. Let’s take a look at some of the most recent missteps.

Just this week, AT&T decided to change its Data Plan pricing for new iPhone and iPad users. That all too tempting “all you can eat” plan for the iPad will be no more on June 7, and new iPhone customers won’t be able to have unlimited plans either. This comes only 1 month after AT&T started selling the plans for the iPad. AT&T wrapped this up is some really sloppy PR spin telling us that for 65% of its customers they will see a price reduction and quite a few folks see this as a positive. And for some I’m sure it will be. But the numbers don’t really add up in my mind. Keep in mind that if you go past the new limits (2GB is AT&T’s new cap, where 5GB has been the standard on some other carriers) you pay a fee for the next GB. Again, for some that might be sufficient and all hunk dory, but keep in mind that the current push for the iDevices and all smartphones includes a big sales pitch for video on the go. Show me a review of a mobile connected device that doesn’t feature how well or not a device displays video.

The other theme in mobile land is that everyone wants to see the iDevices disconnected from the computer so that everything, including apps don’t have to be synced with the home base. Well, all that syncing does add up.

If you think that AT&T picked its limits without an eye towards all those extra fees they are going to collect, then you’ve missed the point.

AT&T also recently upped its ETF considerably. Many, myself included, think that this is because they know that they are going to lose iDevice exclusivity in the near future and they are anticipating a migration away from their service.

We’re also now hearing that the new iPhone (or its OS-still not clear to me) will finally allow US users to enjoy tethering in the way that other countries currently can on the iPhone. There’s several catches here though. First you have to give up your unlimited plan if you have one to do this. Second, you can’t tether an iPad to your iPhone. Come again? Remember this comes almost a year after AT&T and Apple were the subjects of derisive laughter at the last iPhone Keynote when tethering was announced as an option.

And the last PR goof up has nothing to do with getting more out of its customers. Recently a user emailed AT&T’s CEO complaining about service. He apparently did this twice. AT&T’s response? The customer was contacted by AT&T’s legal department and threatened with a Cease & Desist letter if he continued to email the CEO. At first glance that just seems like a legal department and CEO who want to smack down annoyances. On second glance, it makes you wonder if anyone in the AT&T legal department actually has a law degree because of the sheer stupidity of the move. AT&T has since apologized, but this is one of those situations where you quickly become the butt of jokes that find themselves deeply ingrained in the culture.

Steve Jobs’ recent comments at the D8 conference, when he was asked about AT&T’s service were telling. He says he hopes they will improve and that it is a difficult challenge. He also alluded to the fact that things might get worse before they get better. When asked from the audience what happens when AT&T doesn’t or can’t improve, he responded simply “It won’t.” The playwright Beckett couldn’t have answered it with a more ironic and tragic tone.

AT&T doesn’t seem to have a sufficient reservoir of pride when it comes to looking at what it offers. It’s like owning a beautiful piece of real estate but not keeping it in good condition. AT&T has made some upgrades to their service, but it is still lacking, depending on where you live. And yet, they still boast proudly about their network and what they offer nationwide, while in some ways making what was the hottest mobile device a crippled luxury for some. I continue to find this story one of the most amazing in corporate and marketing history, and I fear that the fact that those of us who enjoy our iDevices are only encouraging AT&T and other carriers to not respond. Apple might help make a change with potential upcoming announcements, but Apple too enjoys the cash that it is raking in and until it slows, there is no pressing reason to move to other partners.