In a crowded space dominated by black, white, and silver boxes, LG is showing that there is still innovation left in the smartphone world in the form of the G Flex. Touting a curved display, and one that could bend and handle a little bit of abusive force, along with a self-healing back cover that whisks away small scratches, is the G Flex just another pretty face with some nice curves or does LG have enough muscle to flex? 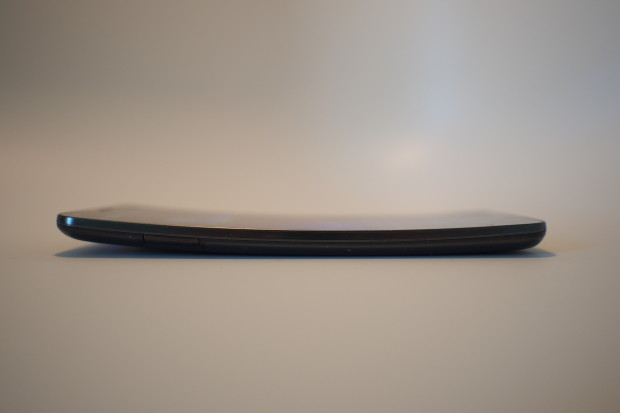 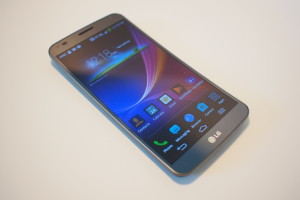 The G Flex is a large phablet. With a curved screen housing a flexible 720p HD display measuring 6 inches diagonally, it is both larger in size than the 5.2-inch while also being lower resolution than the 1080p screen of the current LG G2 flagship, though the G Flex borrows a lot of its styling from the G2.

Interestingly, though, the design is so radical that when set on a table at a restaurant in Half Moon Bay, California, I had several guests approach me at the bar and asked what happened to my phone, implying that I had warped the display itself. When I told them that the curvature was a natural part of the design, they were a bit shocked.

We still have the same signature design with the placement of both the volume keys and the power button on the rear of the device, a change that was introduced by LG when it had debuted the G2 late last year. additionally, the device has two notification lights that make it convenient to see if you have an alert on the G Flex. 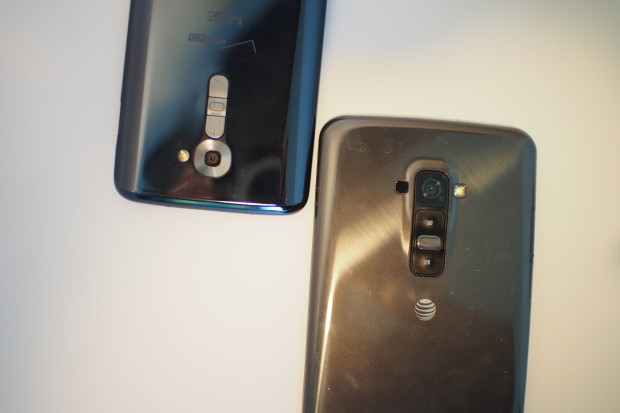 Like many traditional smartphones, there is a front-facing notification light in the upper left corner of the display, however, a second light is also built into the power button that flashes and glows if you have awaiting alerts. This is convenient for users who place their phones face-down on a table.

According to LG, this not only makes the device cleaner and you’ll likely avoid accidental presses of hardware buttons while you’re trying to wield this large phablet, but also when you’re holding the phone to your head for taking voice calls, most people naturally rest their index finger in the space on the center rear that now houses those keys, making the change in location one of ergonomics.

In terms of the design itself, you have a unibody polycarbonate enclosure. The back does have a bit of diagonal striations, which makes it look like it’s chiseled from brushed metal, but that’s all for looks. Despite the plastic construction, however, the device is more “rugged” than other plastic models in that the back cover is a self-healing back.

We didn’t do a torture test of the back cover, but according to marketing materials shown by LG and AT&T, smaller surface-level scratches should heal themselves in a day or two. To speed up the healing time, users could apply a little heat by placing the back surface side up in the sun or applying a hair dryer.

Like the G2, the rear also houses a 13-megapixel camera with optical image stabilization. In reality, for many consumers, what this means is that the LG G Flex, like the flagship, performs admirably well in low light situations and can create a bright photo without even requiring the use of the single LED flash on the rear side. 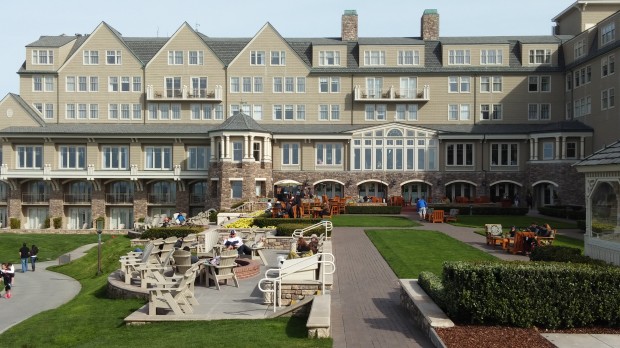 In normal daylight, photos retained quite a bit of details, though in bright situations with lots of contrast, the G Flex struggled to expose the image properly whereas the competing Nokia Lumia Icon did a better job of pulling out details in the shadowed areas. 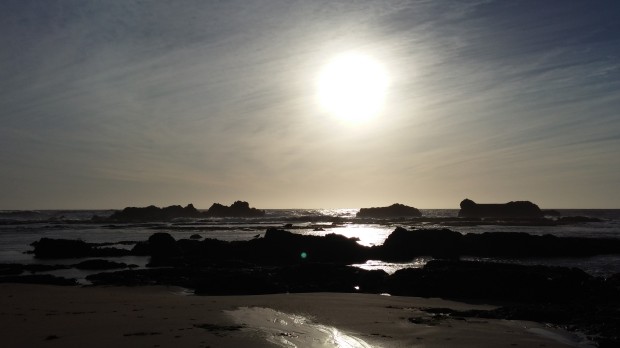 It’s something that a better HDR software should be able to fix. 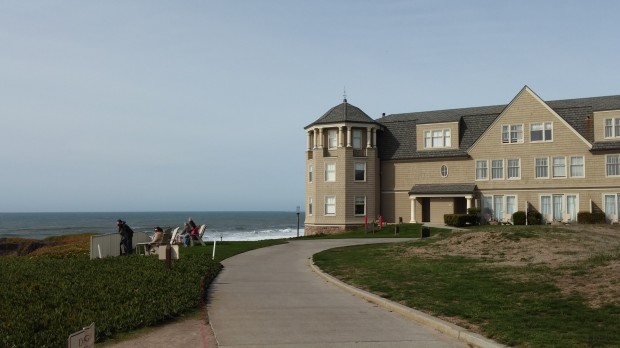 Still, under normal shooting conditions with daylight, the G Flex was able to retain quite a bit of details with its 13-megapixel camera. 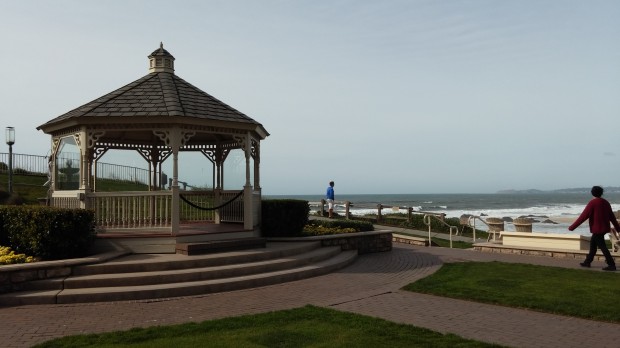 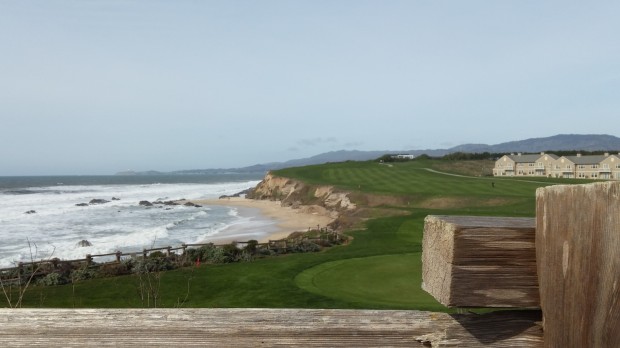 In low light, because of optical images stabilization, the shutter can stay opened longer, which means the G Flex is able to capture more light. This means that images were bright and there was no blur as a result of shaky hands, a phenomenon that’s quite common to cameras without optical image stabilization. 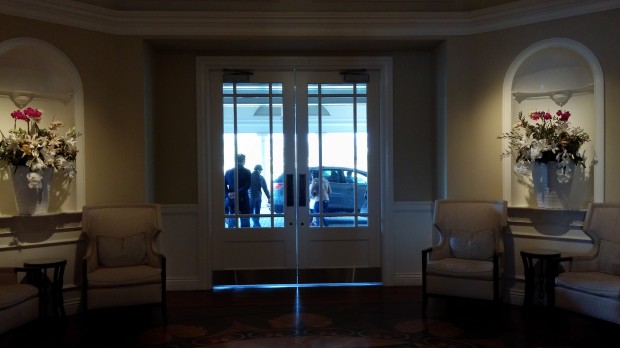 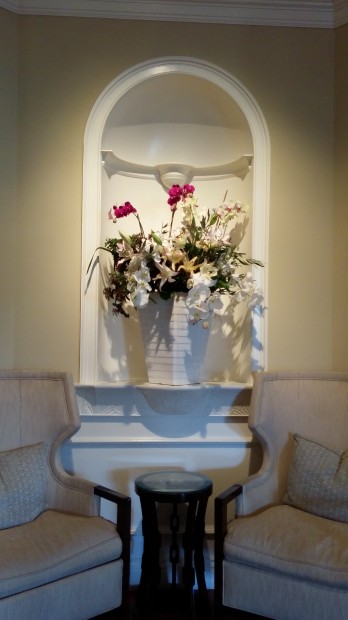 Yet, despite its strength at lighting up a picture even with little available light, there are two problems with the G Flex’s camera. First, the lens does capture a bit of light flare, especially if you’re trying to take a picture with a street light or a candle in the background. 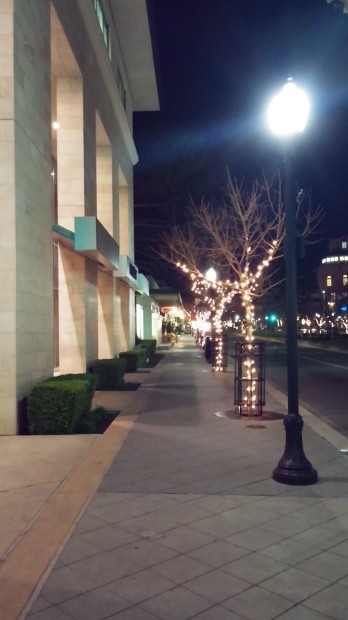 The second issue is that the camera has a difficult time focusing, and most shots taken with automatic mode and allowing the camera to pick its focus point resulted in out of focus shots. So while the image is still bright sans the use of flash, the images were practically unusable unless you dedicate more time to tapping and focus and waiting for the camera to tediously find focus. 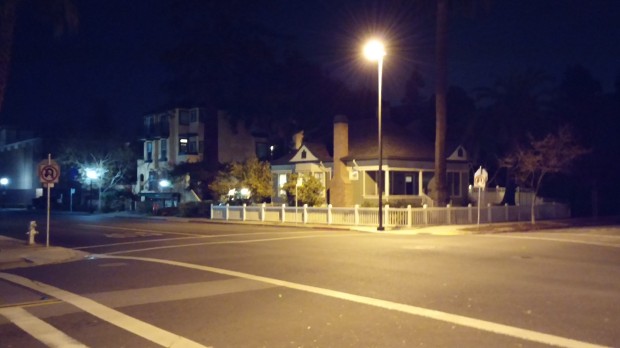 On the rear, also, you have an IR blaster port to the side of the camera. The port works with LG’s prebundled Quick Remote app for controlling your home entertainment center.

Also on the rear panel, which isn’t removable so you do have a sealed battery, is a very nice and loud speaker with great audio fidelity. Unlike the HTC One’s BoomSound speakers with Beats Audio, the speaker quality of the G Flex sounds more rich and less synthetic while still being just as loud. 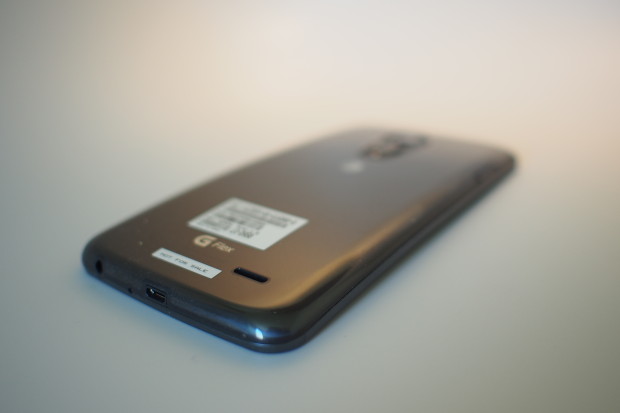 If you find yourself constantly watching videos, downloading movies through Google Play, or streaming content on Netflix or YouTube, the larger curved screen feels immersive for consuming content. You’ll, of course, likely want to orient the device in landscape mode to enjoy your video files. Coupled with the great sounding speaker, this does lead to a pretty enjoyable experience. 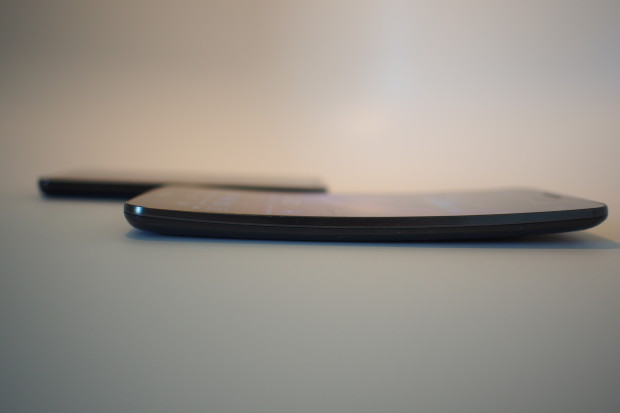 As a phone, the curved display, which houses a flexible panel underneath, also serves an ergonomic purpose, angling the microphone closer to your moth and allowing the phone to comfortably cup your face better than holding a large, flat slab of glass. It’s a more comfortable talking experience when compared to AT&T’s Nokia Lumia 1520, and call quality sounded great on both ends. 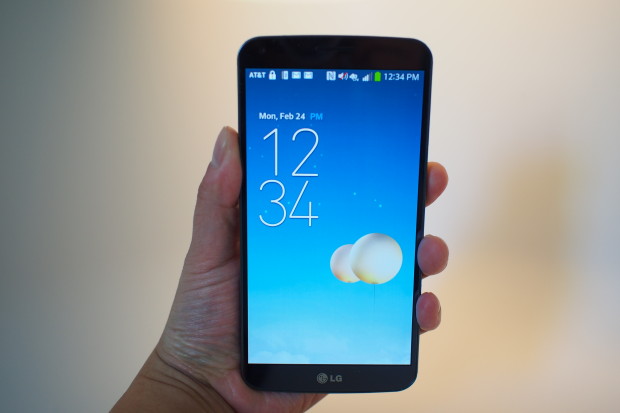 With the G Flex, and also with the G2, LG had given a lot of thought about how the user will use and interact with the smartphone. This is important given some of the design changes that were introduced. For instance, given the rear placement of the power button, it would be inconvenient for users to have to physically pick up a phone that was set down on a desk to activate the power button to turn on the display, and then set the phone down on a desk to use. With the G2 and the G Flex, users can double tap on the screen to wake up the phone with a feature called Knock On. 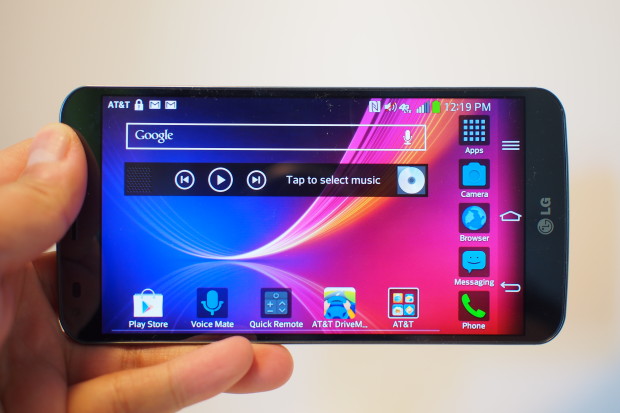 Unlocking the phone, unlike many other smartphones, the G Flex can be used in either portrait or landscape orientation in the home screen. And with a snappy quad-core Snapdragon 800 processor, animations and transitions are both quick and fluid without any lag.

The most notable enhancement to LG’s custom UI on top of Android 4.2.2 Jelly Bean is multitasking. There are three different ways to juggle simultaneous multitasking on the G Flex.

The first way is through the QSlide apps, which could be activated via a widget and widget bar when you pull down the Android notification bar. This mode is similar to having multiple windows opened on your desktop PC or akin to Samsung’s Pen Window view on the Galaxy Note 3, a feature that requires the S Pen to activate on LG’s rival. 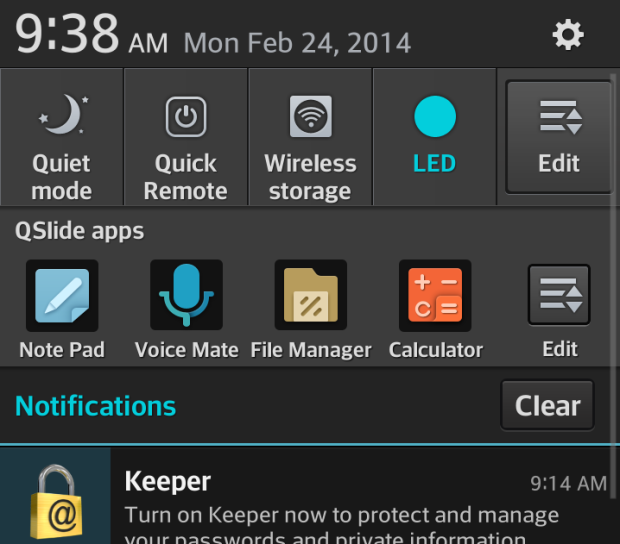 With QSlide, users can open any number of select applications that are compatible with LG’s APIs–many of them are first-party apps that are preloaded. Then, you can move these windows around, re-size them, and even adjust the transparency or opaqueness of the windows so you can see through the floating application window to see the main window underneath. Running multiple QSlide apps at a time and having a larger app running in the background taking up the full screen opens up multitasking to a whole new level. 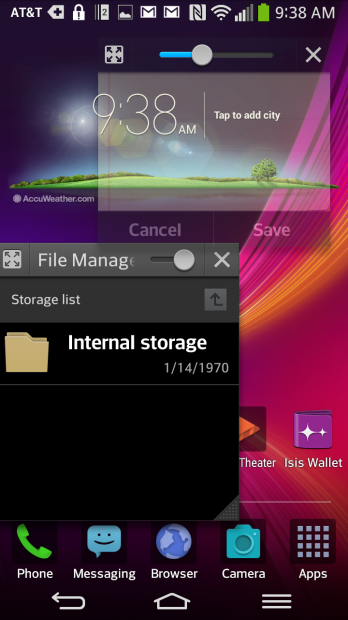 A second method is by saving windows. In reality, this is not unlike what you would do in a a Windows or Mac OS X desktop by minimizing windows to the taskbar and then clicking on the taskbar items again to recall the windows when you need them again. 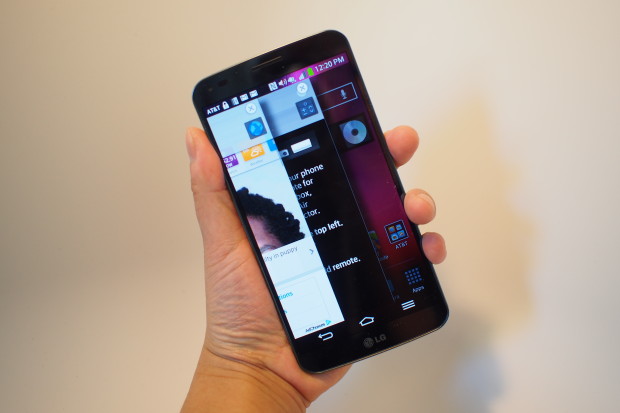 Using a three-finger gesture, you can swipe inwards from the right edge of the app screen, and it will “minimize” and save your app. To recall the app and the “taskbar” in this mode, use the same three finger gesture and instead swipe in from the left edge of the screen. 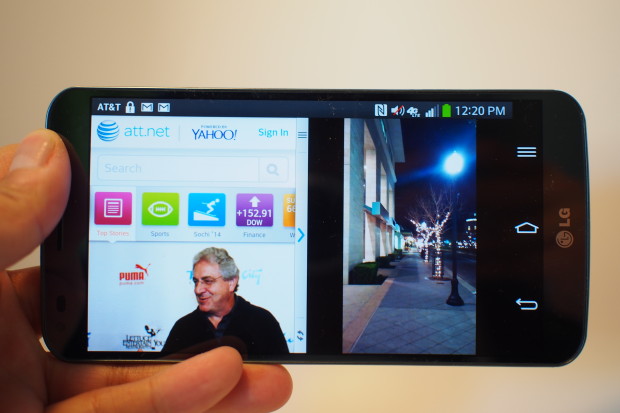 And lastly, a third multitasking method is similar to Samsung’s Multi Windows View on Android or to Windows’ snapping two windows side by side. Pressing and holding the back key will bring up a menu that allows users to run two apps side-by-side and users can then re-size those apps as well.

LG and AT&T also bundled a number of other apps and customization. A one-handed operation in the Settings menu mode compresses the software keyboard and skew it to one side of the phone, allowing you to still comfortably type while holding the phone in one hand and using your thumb on that same hand to reach all the keys.

You can also have the display remain on when the front-facing camera detects your face and also pause videos when your face isn’t detected.

A Quick Theater app showcases your photos, videos, and YouTube in a nice UI while AT&T’s bundled Famigo app makes the phone more child-friendly for when you let your kids play games on your phone in their down time. 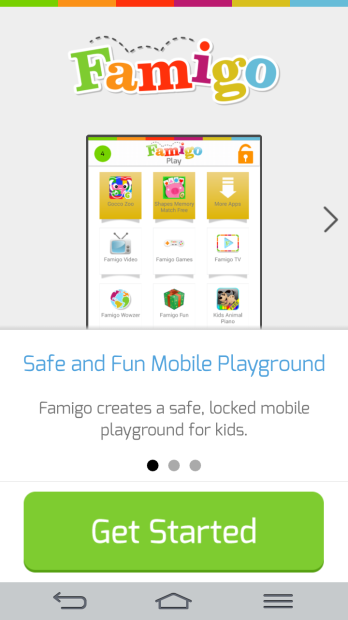 Despite all the add-ons and the performance of the G Flex, battery life on the phone is great. I was able to squeeze out a little over a full day of use when connected to AT&T’s fast 4G LTE network in the Bay Area. In San Francisco, speeds ranged between 10 and 30 Mbps on the download side and uploads were equally as zippy with around 10-14 Mbps speeds. 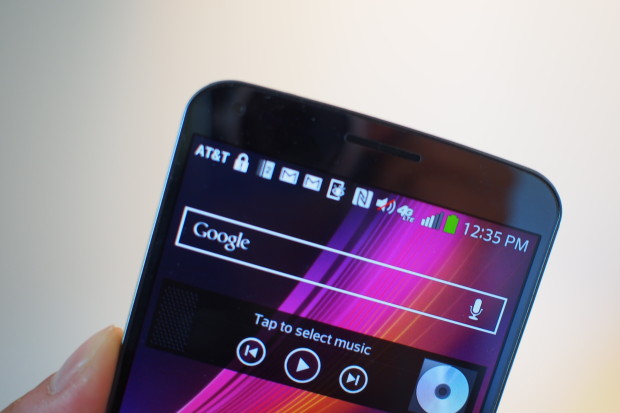 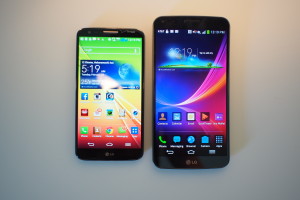 The LG G Flex is a solid entry into an increasingly crowded smartphone space. However, the question remains if a curved display is enough to woo and entice smartphone shoppers. We already have solid entries from LG in the past, in the form of the AT&T LG G Pro and the LG G2, also on AT&T and rival carriers, and the G Flex adds to the lineup with a curved screen.

Powerful performance aside, the G Flex seems a little hampered immediately by its 720p HD display, rather than a full 1080p HD resolution panel. And speaking of that curious display, it’s hard to argue for the merits of a curved screen since no matter how immersive a movie experience on the G Flex is, you’re still viewing it on the confines of a 6-inch, rather than 60-inch, panel.

The real merits of LG’s experiment into flexible display technology is in the durability of the design. With a screen that’s harder to break, crack, or damage than traditional glass-covered LCD panels, the curved G Flex can flex its muscles and bend under force with no damage. A self-healing coating on the rear is also important in allowing users to enjoy the G Flex’s beautiful curves without having to use a case.

However it will be a while before we will actually be able to lay hands to a phone with a folding and truly bendable shape-shifting display. For now, though, the G Flex represents a vision in the right direction for those who want to be on the forefront of technology. For those who want a solid smartphone right now without having to deal with the experimental beta for a curved display, there are more robust phones for your money on the market today, including the G2 on AT&T’s LTE network.