Just weeks after its release, Microsoft’s Lumia 635 is becoming an even better alternative to picking up a cheap iPhone 5c or refurbished iPhone 5s. A deal at Fry’s ending this afternoon gives AT&T users the option to pick up the device for just $79.99, making it a very affordable iPhone alternative.

Until this afternoon buyers at Frys.com can pick up the AT&T Nokia Lumia 635 for $79.99. That price doesn’t include taxes and fees so it may be a bit higher once delivery charges and extras are factored in, but it’s still $20 below what the iPhone alternative costs on AT&T. Users who are willing to join AT&T’s prepaid mobile network instead of buying the T-Mobile version stand to also get a heavy discount. The Lumia 635 costs T-Mobile users $168 with or without an a monthly equipment installation plan. 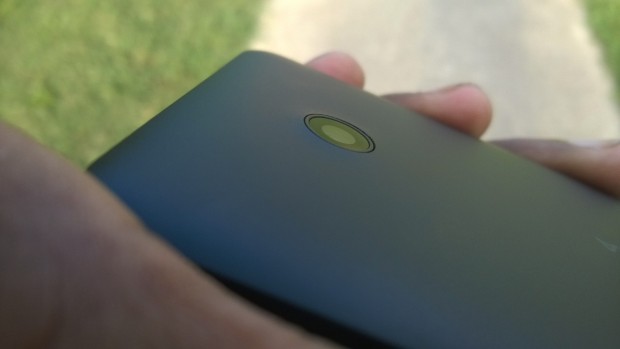 To be clear, the deal on the Lumia 635 doesn’t have a single catch other than it’ll need to be used on AT&T’s network. Frys is limiting the smartphones to one purchase per household though.

Announced early in the summer, the Lumia 635 is Microsoft’s iPod Touch and cheap iPhone alternative in no uncertain terms. The Lumia 635 features a quad-core processor, 512 megabytes of RAM for running some of Windows Phone’s more robust apps and games. Users also get around 8GB of storage space to play around with and store their memories, but anyone buying the phone would probably do better to add more storage using the microSD card slot behind the phone’s removable plastic shell. All of the essentials are here including 4G LTE connectivity and a 4.5-inch display. 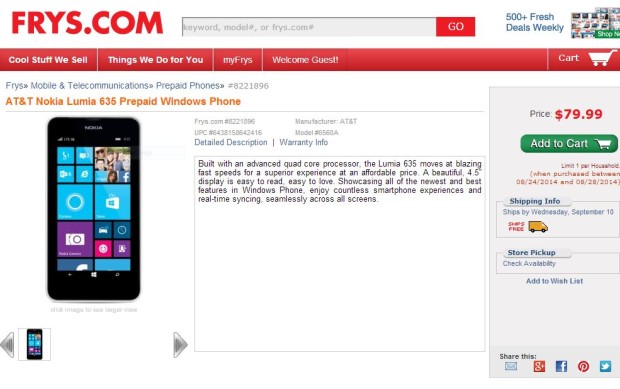 In a recent review of the device GottaBeMobile found the Lumia 635 to be a very capable device, with a few question compromises. The Lumia 635 is only a mildly decent iPhone alternative and not a direct iPhone rival because it omits some small hardware features. For starters, users actually have to adjust the device’s screen brightness manually because the Lumia 635 doesn’t include what’s called an ambient light sensor. The Lumia 635 only includes a single rear-facing camera that won’t impress anyone who has used a high-end smartphone or even a point-and-shoot camera in the last few years.  Problems with that middling rear-facing camera are compounded by the fact that the Lumia 635 doesn’t have any sort of flash. In short, low-light pictures don’t exactly turn out that well.

Even with all of those issues the Lumia 635 is a legitimate iPhone alternative because of price and ease of use. It won’t replace the high-end smartphone of someone who needs a camera that can take the best photos possible. However, it’s an easy to use smartphone that includes a few extras that kids and first-time smartphone owners will enjoy. That it’s cheap without users have to sign a two-year service agreement certainly doesn’t hurt either.

Other smartphones – like the Moto G, or even the Lumia 520 – offer a decent smartphone experience at a reasonable price, but they don’t include the Lumia 635’s 4G LTE connectivity. 4G LTE allows users to connect to the latest in high-speed data networks. It might sound like a small detail, but it’s really not. 4G LTE connectivity is the difference between being able to watch the YouTube video everyone else is talking about and having to roam around looking for a Wi-Fi connection so that YouTube video doesn’t buffer every couple of minutes.

Frys is offering same day shipping on the Lumia 635. Again, users looking to pick up the iPhone alternative had better make a move quickly. The Fry’s deal ends tonight. Tomorrow the Lumia 635 should go back to its regular price.