With an early October reveal date behind them and the holiday shopping season due to kick into high-gear next weekend, Microsoft is finally ready to share crucial Lumia 950 and Lumia 950 XL release details including final pricing and a in-store date for AT&T Wireless Customers. The company hopes that the iPhone 6s and iPhone 6s Plus rivals will act as standards barer for a new generation of Windows Phones.

The AT&T Lumia 950 launches officially on November 20th, this coming Friday, AT&T Wireless confirmed in a press release this morning. On that day, shoppers can pick up the Lumia 950 in all of AT&T’s retail stores. Lumia 950 pre-orders are set to arrive on the AT&T Wireless website and the Microsoft Store tomorrow, November 17th. 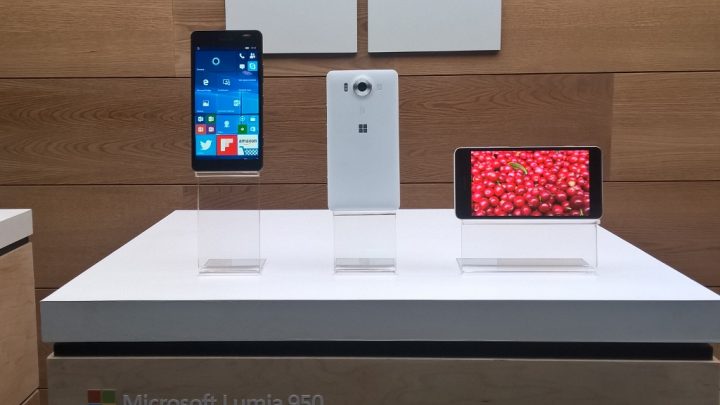 Microsoft announced the Lumia 950 and Lumia 950 XL on October 6th at an event focused on Windows 10, its operating system for smartphones, 2-in-1s, notebooks and desktops. AT&T plans to offer the Microsoft Lumia 950 in a few different ways to satisfy potential buyers. Users who sign up for its Next 24 program will pay $19.97 in monthly installments over 30 months. The Next 18 plan features payments of $24.96 over 24 months. Next 12, AT&T’s shortest installment plan gets buyers Microsoft’s regular-sized iPhone 6s rival for $29.95 a month. Shoppers who sign a two-year contract can expect a purchase price of $149.99. All of these AT&T Next offerings don’t include any money down at time of purchase.

AT&T Wireless says that it won’t selling the Microsoft Lumia 950 with the dock that users need to take advantage of its Continuum feature. Earlier this year Microsoft revealed that connecting the Lumia 950 and Lumia 950 XL to a dock allows it to be used like a portable computer, just without the ability to add programs outside of the Windows Store.

The Nokia Lumia 950 is one of the fastest, most powerful Windows Phones ever created by any device maker. It has a Qualcomm Snapdragon 808 processor inside with 3GB of RAM and 32GB of internal storage. The rear of the Lumia 950 is dominated by an upgraded PureView camera with triple flash. Microsoft is hoping that this camera, a 5.2-inch Quad HD OLED display and Continuum will help this device standout from all the other phones shoppers can choose from this holiday season.

The missing Display Dock is notable because the Microsoft Store is giving the accessory away with the iPhone 6s rival when users buy there. What’s more, users have the option of picking up the Lumia 950 XL completely unlocked there.

The $649.99 Lumia 950 XL has a quad-core Snapdragon 810 processor and a 5.7-inch display. It’s aimed at users who want the same features as the Lumia 950, but in a size that mirrors the iPhone 6s Plus’ girth. Pre-orders for the device are open now, and anyone that logs into their device after release will get a code that they can redeem for their free Display Dock. The Lumia 950 XL won’t actually arrive on door steps for more than a week on November 25th. Why the delay in between the time the Lumia 950 ships and the Lumia 950 XL arrives is unclear at this point.

Chances are that we won’t hear any other Lumia 950 release date details arrive anytime soon besides AT&T’s plans. Microsoft confirmed shortly after it announced the devices that it was scaling back its involvement with carriers in the United States. Users took this to mean that going forward it would work in a limited fashion with carriers while making all of its devices available online without a two-year contract. In European countries that may be true, but Microsoft has remained very quiet about a potential release date for the unlocked Lumia 950 in the United States.

Some speculate that the company is keeping quiet because it once again signed a deal that limits the Lumia 950 to AT&T in the United States. If that’s true, Microsoft will have no mainstream Windows phone for the growing number of users who prefer to buy phones at full price and take them to whatever carrier they have service with.