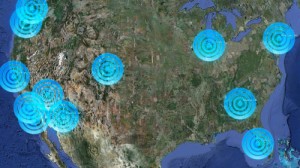 Gizmodo sent a bunch of 3G modems all over the U.S. to see how speedy various networks are. AT&T was the clear champ, with the fastest download times in six of the 12 markets. AT&T had the fastest upload speeds in all 12 markets. If you’re lucky to live and work in places with rock solid coverage from more than one network the speed tests could come in handy when figuring out which company to fork money over to.However, the tests don’t delve into coverage and reliability, issues that are much more important in my opinion.

I’ve been a loyal Sprint 3G customer for several years because the service always seems to just work when I need it. I’m also reluctant to experiment with other networks because Sprint has allowed me to stay on my $59 per month plan with unlimited data. Switching to AT&T, Verizon or T-Mobile would result in a 5GB cap.

It doesn’t matter how fast your network is if a clear signal is missing in action. I’ve successfully used various modems on Sprint’s network in New York, New Jersey, Pennsylvania, Washington DC, Virginia, Georgia, Texas, Hawaii, Nevada, Arizona and California. I regularly use my MiFi to get my iPhone online and to place calls via Skype in AT&T dead zones in San Francisco.

Which 3G network do you currently subscribe to? Is speed a big factor in choosing a network or do you care more about something else?