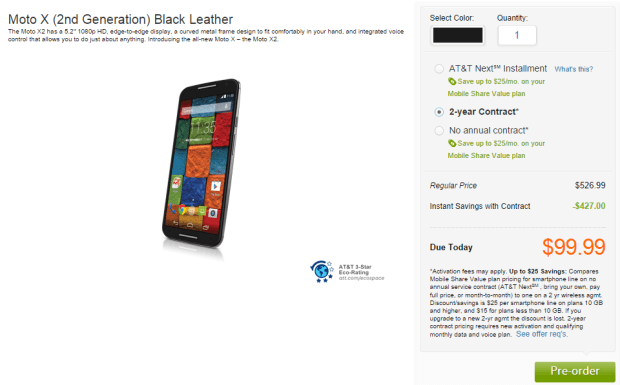 At full price, AT&T is asking $526 for the new Moto X. That being said, the AT&T new Moto X with a two-year contract costs $99. Of course, AT&T now offers an early upgrade program that lets new smartphone buyers pay for their device in installments. Called AT&T Next, monthly payments of $22 for 18 months are required to get the new Moto X as part of the program. There’s also a 12-month AT&T Next option that’ll cost users 12 monthly $27 payments.

For users who weren’t planning on buying the new Moto X with a two-year contract, moving to pre-order the AT&T new Moto X now might be a good idea. There’s no telling how long pre-orders from Motorola itself will last, so it’s not a bad idea to get in early. AT&T is showing delivery times for the new Moto X as September 23rd.

If that isn’t the case it’s a much better idea to just wait for Motorola to make the new Moto X available on its own site. First, Motorola’s Moto Maker site will be the only place that users can get a new Moto X with 32GB of storage. That in itself is huge, the Moto X doesn’t include a MicroSD card slot so anyone purchasing from AT&T is stuck with 16GB of on-board storage permanently. Second, AT&T is actually charging a bit extra for the Moto X. Motorola’s site will offer the new Moto X at $499, $26 lower than what AT&T is charging – though it’s possible AT&T is including taxes in their figure and Motorola isn’t.

Read: The new Moto X: 7 Cool Accessories to Consider Before You Pre-Order

Buying from Motorola itself is the only way for university students and staff to save $49.99 on the new Moto X. Motorola will let users with a .edu email address get a discount on a new device.

When Motorola does make the Moto X available AT&T users will be able to get a customized AT&T new Moto X for the same price as what’s available on the carrier’s website. That being said, options for additional storage, different colors front and rear faces will also be available. Last year, Motorola allowed users to customize their wallpaper and greeting too.

In addition to the AT&T new Moto X, Motorola will also offer the new Moto X in a Pure Edition. This version won’t come with any carrier extras. Users will be able to customize it to their heart’s content and even flash new software onto if they choose. Best of all, they’ll get updates straight from Motorola and not be forced to wait for AT&T to decide when they get Android L and later large Android updates.

The new Moto X Pure Edition will cost $499 too, but no carrier subsides will be offered.