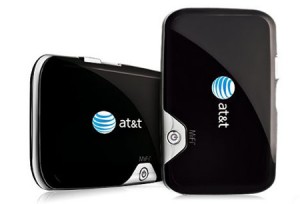 While Xavier’s been over the Sprint Overdrive, a 3G/4G mobile hotspot that’s made by Sierra Wireless to compete with Sprint’s original Novatel 3G MiFi, one possible alternative, which may be better for people in Xavier’s position, for a mobile broadband Internet connection on the go that’s sharable with up to five devices is AT&T’s MiFi 2372 Mobile Hotspot, also made by Novatel.

The 2372 is similar in respects to the company’s previous MiFi devices for CDMA carriers Sprint and Verizon Wireless, however the MiFi 2372 is more curved and takes on a more bulbous form factor. That device has a glossy front and soft-touch matte black rubberized finish on the back side, which also accommodates the battery door. On the top, you have the power button, which also serves dual-purpose as a light indicator with various color LED lights that indicate network connection and status; the lights also either stay fully lit or will flash. While having an indicator is useful, having the user memorize these color codes seem to be akin of doctors having to call out codes in the emergency room–which is a long way of saying not very helpful at all unless you’re well versed in Novatel’s lingo or have a cheat sheet at hand. Fortunately, as the company moves towards a 4G MiFi for Sprint and Verizon (WiMax and LTE networks respectively), the company is adding a basic screen to show battery life and network connections rather than having users guess what the blinking Christmas tree lights really mean.

On the front chrome side panel, which is nicely concealed, you’ll also have a WiFi light, which indicates that the MiFi 2372 has successfully created its WiFi network and is broadcasting its SSID–in my case the SSID reads MiFi2372 followed by four numbers–so you can find that SSID on your laptop, smartphone, tablet, or other WiFi-enabled gadget and connect it to your Novatel MiFi 2372 mobile hotspot.

On the backside, once you push down on the battery cover and remove it, you’ll also need to remove the battery to access the SIM card slot. There are several caveats with the SIM card. First, the locked AT&T version of the MiFi 2372 will only accept a data-only SIM, meaning that it will accept SIM cards from the company’s USB modems, the Galaxy Tab, or even the iPad with a micro SIM to SIM adapter. The last one is interesting as those who had gotten the $30 unlimited data price on the contract-free iPad can slip their SIM in and enjoy unlimited data on the MiFi. It’s unclear if AT&T will patch that loophole in the future, but for now when I had tried the MiFi with the iPad SIM with a micro SIM adapter, it does work. Using a smartphone SIM will not work in the locked AT&T MiFi unit. However, that said, owners of a Novatel, unbranded and unlocked unit not from AT&T could use their voice and data SIM from a smartphone and connect just fine.

On the side panel towards the rear of the device is a micro USB charging port. The nice part about this MiFi, compared to the older CDMA MiFi, is that you can connect a USB cable into your notebook and keep the MiFi charged while still using it as a wireless WiFi router; on older MiFi units, plugging the device into your laptop would initiate USB tethering, which would limit the mobile broadband connection to just that one laptop versus the WiFi router which would enable up to 5 devices to connect.

Speaking of using the MiFi as a WiFi router, the device does also enable file sharing on the small network, which is great for small business groups that travel together and may need to share files over the small MiFi network. Plug in a micro SDHC memory card into the slot right next to the micro USB charging port on the side of the device and you can go ahead and share files with other users.

The Novatel MiFi 2372 runs Novatel’s MiFi OS, which supports widgets, viewable through the Web-based user interface. Currently, there are only a number of widgets that are supported, including one for SMS messages, weathers, and a map for geo-location services should the user enable the GPS feature on the device.

To log into the Web-based user interface, users need to open a browser and type in att.mifi to log in–of note, I tried this with Google’s Chrome browser and it did not work; the att.mifi address did work on Microsoft’s Internet Explorer and Mozilla’s Firefox browsers on Windows 7.

From there, users can access the widgets and change any number of settings of the MiFi, including configuring GPS and adjusting the network settings. Unfortunately, as the AT&T MiFi has been locked down by the carrier, you can’t really configure the access point (wap.cingular) to use it with a smartphone SIM and you must have a data-only SIM for the device to connect to the carrier’s mobile broadband network. To access these settings, you may need to log in with a password; the default password is attmifi, which you can change after logging in.

For the most part, most users will not need to access the Web-based user interface, unless you really need to send or view text messages. For me, I typically checked weather just by using a regular Website rather than going to the MiFi Web-based UI.

The AT&T MiFi 2372 offers good performance. AT&T claims the fastest 3G network speeds, and for the most part the carrier’s claims are true. I get between 0.5 Mbps to 2 Mbps on the upload side and 1 Mbps to 3 Mbps on average on the download side in a suburban area just south of San Francisco, California in decent 3G coverage.

As the device supports quad-band GSM/EDGE and tri-band 3G/HSPA/UMTS radios, you can roam and travel around the world with the MiFi, though your data roaming charges may be hefty as it is SIM-locked to AT&T. For international travel, I would recommend purchasing an unlocked MiFi unit, which goes for around $250-$300.

Depending on what type of user you are, the four-hour battery life may either be a good thing or a bad thing. With tablets and netbooks ranging from 8-10 hours of battery life on the highest end, a 4-hour MiFi may seem anemic when coupled with the WiFi-only iPad or Toshiba netbook. However, for users of battery-hungry pro laptops, 4 hours of juice may be comparable to what you’re getting on your laptop anyways. In either case, you can always carry around a spare MiFi battery when you need extra power.

Speaking of battery, this is another area where the Novatel MiFi beats out the Sierra Wireless Overdrive competitor (offered via Sprint and some of its WiMax 4G partners, including Clear). While both devices boast a user-replaceable battery, only the MiFi’s battery is easily found and available for purchase. I had an Overdrive and my battery inside the Overdrive started bulging out. I checked numerous retailers and providers, including Sierra Wireless and Sprint, but no one carried spare batteries and Sprint offered to exchange a new Overdrive for me. With the Novatel unit, you can always find spare batteries, though you may need to wait a day or two to order them online from retailers such as Amazon.com.

AT&T’s Novatel-made MiFi 2372 is a great solution for data-heavy users or those who need to connect multiple WiFi-enabled devices to a mobile broadband connection. Rather than getting an iPad data plan and a USB modem plan, the MiFi 2372 allows users to share just one mobile broadband connection between up to five different devices, which will save users who use multiple devices money in the long run. The device itself isn’t expensive–hovering at about $100 on-contract, it is the data plan that will be most concerning to users. AT&T currently charges $35 for 200 MB or $60 for 5 GB of data.

The Novatel MiFi 2372 landed late on AT&T. While Sprint, Verizon Wireless, and T-Mobile are all gearing up for their own 4G mobile broadband router solution, AT&T’s MiFi will be stuck on 3G for now. Hopefully, AT&T will adopt a 4G MiFi or comparable mobile hotspot solution sooner than later to keep power users happy and fresh.

While mobile hotspot capabilities are being added to smartphones–such as the HTC Inspire 4G–with an optional added subscription fee (you essentially get 4 GB of data per month split between tethering and data for use on your smartphone for a total of $45 monthly in addition to your voice and SMS plans), a MiFi may offer power users more flexibility. The MiFi, you can deplete the battery of your MiFi and can still head on over to your phone to make a call while if you enabled the power-hungry mobile hotspot capabilities of a smartphone, you won’t be able to make calls after you deplete your battery due to tethering. Then again, the integrated solution on a phone costs less at $45 for 4 GB data versus $60 for 5 GB.

Also of note, Kevin Purcell had reviewed the AT&T MiFi 2372 over at Notebooks.com–you can head over there to read Kevin’s thoughts on the device.