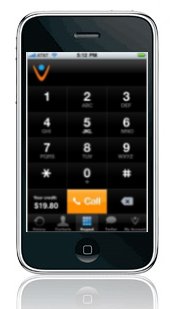 In a pair of announcements, we’ve learned that AT&T is preparing to open their network to VoIP (voice over IP) on the iPhone. Since they allow VoIP on other devices, its exclusion for the iPhone has puzzled some, but there are logical if unpopular reasons for the snub, which seem to be confirmed by the deal Vonage cut with AT&T.

First, VoIP eats up bandwidth, and AT&T is already struggling to keep up with the current bandwidth demands of the iPhone. The Vonage deal circumvents this problem by routing calls over AT&T’s voice network when the iPhone is not using wifi. Yes, technically it’s all tied together in one big traffic-filled network, but voice calls are handled differently and do not consume bandwidth in the same way as data, which is how VoIP treats calls. This also means Vonage calls should work without major detriment on the slower EDGE network when 3G is not available, addressing another shortcoming of VoIP on wireless phones.

That the calls are routed via the voice network deals with the second major issue: fees. AT&T sells phone service. It’s just bad business to let others offer competing phone service on their own network. But with this deal, Vonage users will use AT&T-paid minutes when using the AT&T network. The benefit to customers comes in the form of lower costs for international calls via Vonage, which doesn’t hurt AT&T since they already share international call charges with the carrier that connects the call on the other end.

This sets a precedent for what we can expect for other VoIP providers: you want to play on AT&T’s network, you need to use AT&T’s minutes. It’s an unwelcomed direction for folks looking to VoIP as a way to skip using their AT&T minutes, but it seems like a reasonable, rational compromise to me.

One more thing, some have already questioned what this means for Google Voice on the iPhone. The answer is: nothing. Google Voice is not VoIP, and even if it was, the GV block on the iPhone was issued by Apple. If anything, these announcements seem to prove AT&T was not involved with the GV block, since using Google Voice does not circumvent using AT&T minutes. Sorry, but that’s a whole separate issue. In the meantime, remember, calling through Google Voice over the iPhone is already possible, albeit with a lengthy dialing sequence.