At the Consumer Electronics Show, AT&T announced the Pantech Discover, which is priced to target mid-range users despite an impressive an impressive array of features. Priced at just $50 with a two-year contract, you’ll be getting stereo speakers, a brilliant 720p HD display, and dual-core processing power, which are specs that are similar to high-end Android devices released last year, like the flagship Samsung Galaxy S3 smartphone. The device also supports AT&T’s 4G LTE network. 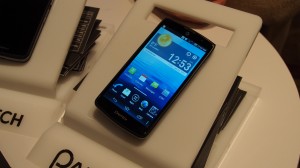 AT&T and Pantech are differentiating the Discover with a number of key features. First, the Pantech Discover will be among the first smartphones to feature the AT&T DriveMode app pre-loaded. The app is part of AT&T’s campaign to have users not text and drive and will make it safe for drivers by limiting phone functionality and distractions.

The second part of the puzzle is Pantech’s dual-mode UI, which makes it easy to operate the phone whether you’re new to smartphones or a more advanced user. In Easy Mode, users will be greeted to a menu system and UI that’s more familiar to feature phones. In the more advanced mode, users will get the more traditional Android user interface. 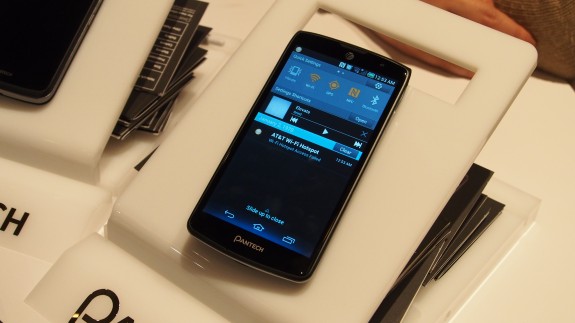 Out of the box, the Pantech Discover feels like a solid device and is a great mid-range device that’s launching soon at the beginning of 2013. For $50 with a two-year agreement, the Discover has many of the hardware specs of Samsung’s Galaxy S3, which launched last year, but comes with a more affordable price tag. Unfortunately, unlike previous Pantech releases on AT&T’s network, it looks like the Discover won’t have any waterproofing features and is basically the standard run of the mill smartphone.