AT&T has expressed its intent on moving to shared data plans in the future, but unlike rival Verizon Wireless which gave a broad timeline on when that may happen, AT&T Mobility has not given specifics about its plans. Shared data plans, also referred to as family data plans or shared family data, would allow users to bundle a singular data plan and tie them to multiple devices without having to purchase data plans for individual devices.

According to a leaked screenshot of AT&T Mobility’s Telegence system obtained by Engadget, the carrier is advising employees of shared data plans, but the screenshot did not give any specifications on when those plans may debut or launch. 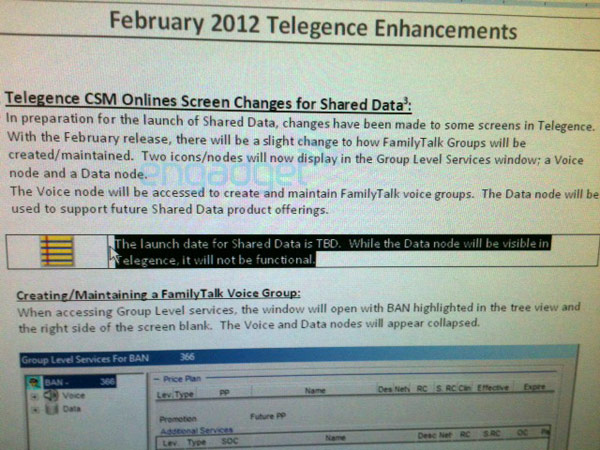 Shared data plans, which will work much like shared family plans for voice minutes, will allow customers to purchase a bucket of data. Customers can tie multiple devices to that data bucket, and there may be some nominal cost per device, which would still be cheaper than having to purchase separate data plans for each device owned.

With customers adding multiple screens to their Internet-connected digital life, shared data plans may help make it affordable to own a smartphone, netbook, and tablet.