The AT&T Galaxy S5 release date is officially set for April 11th, but for many users that took part in the Galaxy S5 pre-order it will arrive as soon as April 9th.

If you took part in the AT&T Galaxy S5 pre-order check your email for a shipping notification and a tracking number that will allow you to see exactly where the Galaxy S5 is at.

The Samsung Galaxy S5 release is coming early for some AT&T buyers.

Users can also log in to their AT&T account to see the tracking number and other information. It does not appear that AT&T requires a signature on the delivery of the Galaxy S5.

For Galaxy S5 buyers that didn’t order a month ago there is still a chance to get the Galaxy S5 ahead of the in-store release date. AT&T is still selling the Galaxy S5 in white and black with a ship date of today. Users can add to the cart and select the fastest delivery for $15 more and the Galaxy S5 should arrive by tomorrow for many users.

The AT&T Galaxy S5 is scheduled for delivery on April 9th.

The Samsung Galaxy S5 is $199 on a two-year contract with AT&T. There are also AT&T Next options that change the price to a monthly installment of $25 or $32.50 depending on how long you plan to keep the phone before upgrading. For users that want to upgrade to a Galaxy Note 4 or Galaxy S6 as soon as new tech comes out the AT&T Next 12 is the best bet.

Shoppers are lucky that the Galaxy S5 release date is the same across all major U.S. carriers including Verizon, but this early Galaxy S5 delivery is a perk that AT&T is normally able to pull off for Samsung devices. Verizon, Sprint, T-Mobile and US Cellular are not currently shipping the device early. 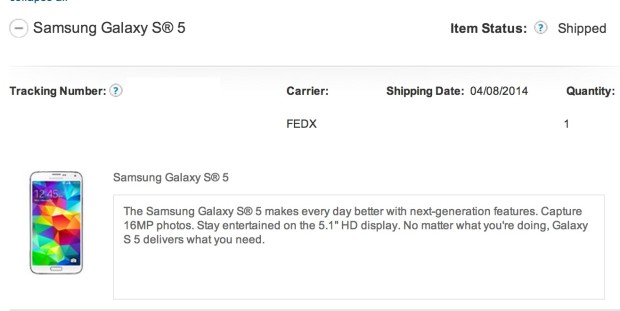 Log in to AT&T to find your Galaxy S5 tracking number.

Verizon says it will ship by April 14th, a bump back from the initial April 11th timeframe. Other carriers should still offer Galaxy S5 shipments for the release date or soon after.

The Samsung Galaxy S5 features a 5.1-inch 1080P HD display, a pulse sensor on the back of the device and a 16MP camera with a 0.3-second auto focus and a large number of photo modes and features. The Galaxy S5 runs Android 4.4.2 with a TouchWiz overlay and special Samsung apps like S Health and a new Private Mode tied to the built-in fingerprint sensor in the Galaxy S5 home button.