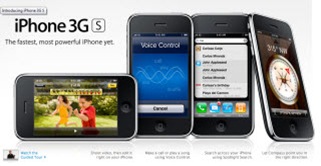 I’m not sure why anyone should be surprised by this. I’m angry about it, but my anger comes from knowing that AT&T would continue to defy any rational thought of building customer loyalty when it comes to pricing the new iPhone 3GS for customers who already have the iPhone 3G and wish to upgrade.

The big pricing for the new iPhone was met with cheers at the WWDC keynote and deservedly so. A new customer can purchase a 16GB 3Gs for $199 and a 32GB model for $299. All seemed well, unless you’ve been following AT&T’s bean counters and their history. Word quickly got out thought that those have a current 3G model and wish to upgrade (remember those contracts started last summer) will be able to early upgrade for $399 for the 16GB model and $499 for the 32GB model. (Note that isn’t mentioned in the AT&T press release in the earlier link.)

Yeah, yeah, yeah, I know some will say but you have a contract for two years. Horse hockey. AT&T is playing a game with diminishing returns (other carriers do this too) by forsaking any semblance of building customer loyalty. Any business or business person worth his/her salt knows that once you hook a customer, you do whatever you can to hang on to them. I haven’t done the math yet, but I’m guessing this is short term gain on a spreadsheet that won’t work out in the long run. But then that’s not the history of the cell phone biz. That’s why they have to spend all that money on Customer Retention Specialists. And of course we know how that game works. Hook Ã¢â‚¬Ëœem, tick Ã¢â‚¬Ëœem off, lose Ã¢â‚¬Ëœem, and then try to hook Ã¢â‚¬Ëœem again. Someone at AT&T got really lucky when Apple agreed to that 5 year exclusive on the iPhone. I bet they’ll retire before it is up next year and Verizon (and possibly other carriers) jump into the game.

But this is not new behavior. I wonder what it is like to work for the PR firm(s) that handle this account for AT&T. From a PR and customer loyalty standpoint AT&T came out a huge loser with Apple’s announcement today. US customers got left out in the cold and basically labeled as second class mobile citizens, while Apple slyly mentioned that their US exclusive carrier would not be able to handle the traffic. To my eye and ear it was an obvious slap from Apple at AT&T on the way features like MMS and tethering were rolled out, listing carriers worldwide that would support the new features at launch. No one had to say AT&T, the graphics told the story. Wouldn’t you think AT&T would have had some sort of announcement parallel with today about the supposed hurried pace they are working on to upgrade their dismal network performance? Wouldn’t you think that they wanted to help their own case for the future? Apparently not.

AT&T’s rep has become such an old joke that no one laughs anymore. I think lots of folks are just going to bide their time until they can walk away from the shoddy treatment. From a business standpoint this ranks with as a very interesting model that will deserve all sorts of study down the road when this is all behind us. How could a company with terrific brand recognition succeed as much as AT&T has while becoming the butt of so much derision?   Again, to be fair, the cell phone game has been played by this for a long time by other carriers as well, but something tells me the iPhone spotlight has shown this off in a light that will probably lead to customers paying closer attention in the future. But then on the other hand the iPhone is such an unparalleled device (at the moment) that most will probably just play along and continue to enable AT&T and the other carriers.

I find it fascinating. I’m sure Google, Sprint, Palm, Verizon, T-Mobile, HTC and Nokia do as well.