In a new series of ads that will begin airing, AT&T is now promoting its network as “the nation’s most reliable LTE network.” Verizon, which had long called its network the most reliable, has not responded to AT&T’s claims. The Rethink Possible network had previously been making bold claims behind its network, citing the fastest 4G LTE upload and download speeds, and now it’s claiming the best network reliability, stealing its rivals crown. 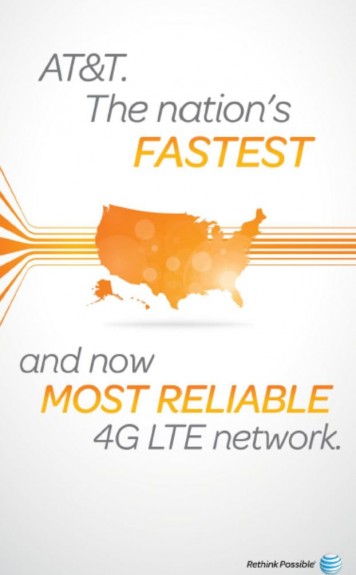 Verizon’s reliability claims, however, are more broad and aren’t limited to 4G LTE. That carrier’s claim extends to the older 3G network as well, an area that AT&T is not addressing, at least not yet.

There’s still a lot of differences between how different carriers are handling 4G LTE deployment. Verizon, which got an early start, has already completed its 4G LTE nationwide deployment. AT&T, after having its reputation tarnished as its network strained to keep up with iPhone demands for so many years–it was the exclusive iPhone provider in the U.S. for a few years and consumers flocked to its network for Apple’s hottest flagship–AT&T had made big network investments, and now the carrier has the fastest network in the nation. Sprint is tackling LTE by offering tri-band LTE, which could improve performance but that carrier still needs to more aggressively deploy LTE to its network. And finally, T-Mobile is trying to take a value approach.

Journey From Speed to Reliability

According to AT&T, it’s handling its network to accommodate faster speeds by placing core network equipment near the top of the antenna to minimize power loss. It’s like a system-on-chip (SoC) design when looking at processors, but this time it’s just when cellular towers. Another improvement is having more hubs located across the country to allow customers to get onto the mobile broadband network without latency. This has led to AT&T being named the fastest network in a series of nationwide speed surveys published by several tech publications.

AT&T’s claims may make sense too as it moves away from speed and builds on reliability. Though there have been a few outages on AT&T’s LTE network, customers were still able to get appropriately decent speeds on HSPA+ when LTE was not available. Rival Verizon, which had banked on network reliability, had suffered more widely publicized outages when it was building its LTE network, leaving customers without any 4G coverage at all for hours at a time. Sometimes, Verizon’s outages were nationwide.

When users flocked AT&T’s network in 2007 with the debut of the iPhone, it looked like the carrier had learned two things. First, to expand its network infrastructure to not drop calls. Second, to improve network performance to deliver faster speeds.

Though AT&T is beginning to change its image, we’ll still have to wait to see how consumers react. Verizon is able to command a premium for its reliability claims, and customers to Verizon are fiercely loyal. It’s a wait and see game now to see if AT&T could woo away customers from Verizon, and once it adds more customers if the network can hold up to future stress. Additionally, AT&T still needs to build out its coverage footprint, an area where Verizon still has a clear lead.