AT&T’s corporate retail stores will be the latest to dump its clunky computer terminals in favor of iPads so that retail associates can look up customer accounts, activate phones, and process purchases. Known as point of sales (POS) or point of purchase terminals, the move will allow retail associates to better interact with customers so that they are not standing behind a counter, lending to a personable shopping experience.

The system is expected to go into place early 2013 and these new iPads will allow retail employees to handle all the functions today that are conducted through a normal computer. According to a report on 9 to 5 Mac, retail employees will be able to access AT&T’s proprietary OPUS software that will allow them to check inventory, look up news and updates from the company, access customer information, and check upgrade eligibility.

The carrier has deployed a more stripped down version of the iPad and iPhone POS terminals allowing retail employees to only handle accessories purchases in select trial markets.

When the fully integrated POS system rolls out on Apple’s iPad for AT&T’s retail stores, there will be small pods or counters in the middle of stores, which will allow employees to have some counter space to place phones and packages on, similar to how Apple retail associates at Apple stores have access to wooden tables in the center of those stores. 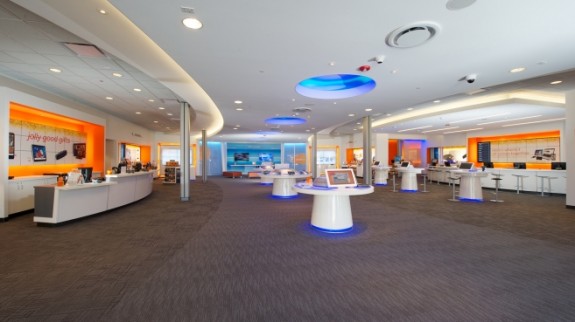 Currently, AT&T is still exploring different credit card processing options. In trials right now, the company requires retail associates to manually enter credit card information into the iPad. Presumably, a swiping system will be used at launch and it’s unclear if AT&T will adopt an off-the-shelf system–like Square‘s reader–or develop its own proprietary equipment–like Apple does.

In recent years, I’ve noticed various retail establishments–from boutique shops to restaurants–adopt Apple’s iPad for their POS terminals. The move likely saves those companies money as iPads may be cheaper to outfit, update, and manage than clunkier computer terminals.