Hours before Apple is set to announce the new iPad and tell us when the iPad 3 release date is so we can run out and buy one. AT&T joined in announcing that they have an “exciting new” product on the way.

If this sounds familiar, it’s because Verizon teased that “Something is Coming” just yesterday, asking users to sign up for more news.

Sprint on the other hand is business as usual with no flashy banners and no mention of a Sprint iPad 3, which isn’t that surprising for a number of reasons. 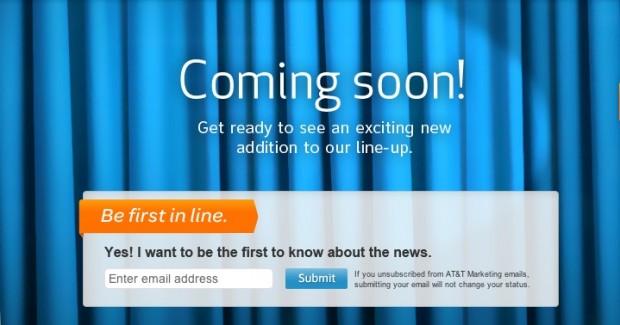 While AT&T isn’t giving any more information about what we can expect them to announce, something tells me we’ll see AT&T offer up an explanation of this mysterious new product around 2 PM Eastern today when the iPad 3, iPad HD event wraps up in California.

We expect that Apple will announce a new iPad with 4G LTE connectivity for Verizon and AT&T. In fact, there are reports of Verizon installing 4G LTE in Apple Stores stealthily using plainclothes technicians.

Even though Sprint isn’t teasing a new product on the day of the iPad announcement, they may still be getting an iPad 3. Why do I think this?

Well, a Sprint iPad 3 would be a brand new announcement, something Apple wouldn’t leave to a web teaser on a horribly designed website. Instead, Apple would make a big deal of an iPad on Sprint by announcing it on stage at the actual iPad event.

For more, check out, Will Sprint Get an iPad 3?