Wireless carrier AT&T had sent us a teaser email saying that it has something new to announce come July 16, but gave little details about what that may be. Instead, the Rethink Possible carrier listed off some major milestones for its network, including fast wireless mobile broadband speeds as was recently ranked by some major publications. Given the teaser focused on what appears to be 4G LTE, we’re speculating that AT&T will announce some new network initiatives. 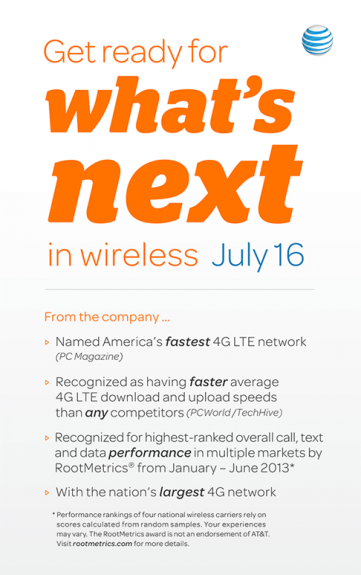 Rival Verizon Wireless had recently held its own press conference to announce that it was completely finished with the 4G LTE upgrade to its national network. Next for Verizon would be the use of AWS spectrum to increase capacity, LTE-Advanced to upgrade speeds, and Voice over LTE, or VoLTE, to allow simultaneous voice and data connection on the same radio which would allow Verizon to begin decommissioning its 3G spectrum for use on LTE.

Potentially, AT&T could give announce initiatives for VoLTE and LTE-Advanced at this event, but that’s unclear given that AT&T’s LTE network doesn’t have as large of a geographic footprint as Verizon’s.

Another potential would be to announce new plans. Rival T-Mobile will be hosting its event to tease new initiatives as well. T-Mobile says that it is taking its boldest moves yet following the UN-carrier announcement that eliminated wireless contracts and phone subsidies. Instead, customers are said to be getting better rate plans and can partake in interest-free financing for the full purchase price of the phone.

AT&T, which had said it was open to a move similar to T-Mobile, may announce new plan changes that may do away with expensive subsidies.

AT&T has also been involved in a number of initiatives that leverages its wireless network, but may not necessarily deal with smartphones or tablets. Some of those include the new Digital Life home experience as well as bringing 4G LTE connectivity to cars thanks to a partnership with General Motors. Potentially, the carrier could announce some expansion of the non-smartphone business.

Whatever the case, AT&T has been coy about its messaging for this event, and we’ll likely have to wait until July 16 to find out. T-Mobile’s event happens today.