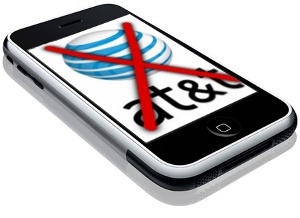 I guess I can’t blame folks for losing their minds amidst all the Apple hype this week. I myself find my sanity slipping away trying to filter through all the stories that mention the Apple tablet and have nothing to do with the Apple tablet (yes, I appreciate the irony here). But I am still rational enough to realize AT&T losing the exclusive rights to the iPhone will not shatter the laws of reality.

Yes, it is possible – possible – that AT&T’s iron clad contract on exclusive rights to the iPhone will expire this year. Wonderful news for folks who like the iPhone but are getting screwed by AT&T’s wireless service. However, I think some folks are letting their joy override the thinking parts of their brains, as seen in this observation from PC World.

From the standpoint of Apple, dropping exclusivity is a great decision. It has nothing to gain from only selling the iPhone through AT&T. Adding Verizon to the mix more than double’s the potential pool of customers in an instant.

Okay, let’s forget for a second that AT&T is just the U.S. service provider, so opening to Verizon cannot possibly double the iPhone’s overall pool of potential customers. And let’s also forget that a sizeable chunk of iPhone users switch service providers to get the iPhone, so being an AT&T exclusive isn’t that big a deterrent. Isn’t the revenue AT&T shares with Apple something they gain from the exclusivity deal? Doesn’t exclusivity eliminate their worries about multiple U.S. networks with different service plans, simplifying things for them and customers? There are clear advantages to exclusivity (no one would bother if there weren’t), so it makes no sense to say there’s nothing to gain with it. We need to ask if those gains outweigh the losses.

But, hey, that’s a PC World guy geeking out. No big deal. What about this one from Business Week?

Apple Inc. may release the iPhone to all U.S. wireless carriers in the next 18 months, doubling or tripling the number of devices sold, said Tim Horan, a telecommunications analyst at Oppenheimer & Co.

With the addition of more carriers, iPhone sales in the U.S. will increase by 15 million to 25 million units annually, Horan wrote.

Huh? In 2009, Apple sold 20M iPhones WORLDWIDE. So without carrier restrictions, they could sell more than that in the U.S. alone? Note, the phrasing “increase by 15 million to 25 million” means an addition on top of the current, which means upwards of 30+ million in the U.S. That even exceeds Horan’s own “doubling or tripling” claim. Not saying that couldn’t happen (the iPhone’s growth has been phenomenal), but I don’t think the exclusivity deal is some magic force field that keeps this from happening.

In addition to these numbers just being tossed around, there also seems to be a lack of discourse on whether it makes sense for Apple to design an iPhone for CDMA networks, like Sprint and Verizon. It’s not simply a matter of tossing in a different radio. Apple will need to support the tech for its lifetime, not just at installation. CDMA does not support simultaneous voice and data, so the OS needs to be tweaked to accommodate that. People point to 4G, but an iPhone still needs to support the existing network as a fallback.

So here’s the question: is the cost of adding and supporting CDMA worth it to get to those few million Verizon and Sprint users who want iPhones but don’t want to switch carriers? Maybe, especially if that few million does turn out to be 25M, but that issue requires serious thought before we assume Apple will open the iPhone to CDMA carriers. Look forward to seeing it opened to T-Mobile and other GSM carriers though.