In a world of smartphones with built-in personal hotspots that share the phone’s data connection, where does a dedicated hotspot like the AT&T Unite Pro Hostspot fit? Can this apparent anachronism surprise potential buyers? Is it worth an extra $20/month on a contract and either a 2-year commitment or up to $200 when purchased without a contract? If you need more versatility than your phone’s hotspot can offer, the answer is yes.

The AT&T Unite Pro Hotspot does enough to make it a worthy tool in a road warrior’s bag, especially if she works with a group of people on the go. The hotspot offers great battery life, connects up to 15 devices to LTE, and charges USB-powered devices or phones.

The AT&T Unite Pro Hotspot by Netgear connects up to 15 devices and lasts all day or charges USB-powered devices like a battery backup.

The AT&T Unite Pro Hotspot has a capacitive touchscreen on top of something the size of a deck of cards. The power button turns the device on or off with a long press. Tap it to wake up the display when it’s on. A flashing indicator light shows the user the Hotspot various states as follows:

On the bottom edge, there are two FME connections for a 5db external antennae made by Netgear to boost signal strength. I didn’t need the boost since the internal antenna provided an ample connection to AT&T’s LTE in my area.

In the middle of the bottom edge we find the micro-USB port. It serves double duty. The port charges the 4020mAh internal battery. There’s also a special cable that reverses the power flow so that the internal battery can charge a USB-powered device, like a phone or small tablet. It’s a hotspot and a battery backup capable of juicing up a phone or tablet.

The built-in 2.4″ capacitive touch screen feels responsive and shows up brightly enough in most settings.

Take off the plastic back with a rubberized non-skid texture to get at the battery and micro-SIM card. The four non-skid feet keep it in place on a car dash while running down the road so passengers can keep working enroute to a meeting. Without the battery the device feels feather light, so you know the battery makes up most of the 4.47 ounces.

Along the right side of the screen we get the home and back buttons. The controls work great.

Netgear designed this with the road warrior in mind. It’s pocket-sized and easy to carry around.

Netgear used a proprietary BatteryBoost cable. The user can only use that cable to charge the device. I wish they designed the AT&T Unite Pro Hotspot so that the user didn’t need a special cable. This would mean a second USB port and some added manufacturing cost that they’d likely pass on to consumers, but it would be worth the money.

AT&T and Netgear promise up to 16 hours of battery life while in constant use. We never ran it all the way down, but it does last all day under normal usage, with our longest session lasting about 12 hours with just under 20 percent left.

Turn on the BatteryBoost feature to charge up an external device and the 4020mAh battery can easily top off the battery of an iPhone 5s, iPhone 6 Plus, the HTC One M8 and Samsung Galaxy Note 4, the four phones we tested it with. The thing also boosted an 8.4″ Samsung Galaxy Tab S. It struggled to charge an iPad Air.

The AT&T Unite Pro Hotspot offers a 30, 60 or 90 minute BatteryBoost to your USB-powered device.

The AT&T Unite Pro Hotspot user-interface gets laid out to make it easy to see usage details, change settings and turn on the 30, 60 or 90 minute BatteryBoost feature. The main features show up as software buttons on the home screen, as seen below.

We see the status of the device’s LTE connection along with battery life on the status bar across the top. The user can choose whether to display their Wi-Fi hotspot’s password and broadcast name on the main screen inside settings, or hide it as I’ve done.

The center of the main screen shows the user’s data usage and time left till the account resets. I loved this feature of the AT&T Unite Pro Hotspot. Until AT&T recently doubled data capacity limits, my family often came up against our data limit.

Under Wi-Fi settings we get…

Under the device settings screen, the user can do the following…

I tested the AT&T Unite Pro Hotspot speed three different ways. First, in an area with a solid LTE connection, I connected an iPhone 6 Plus to the hotspot and ran one speed test. 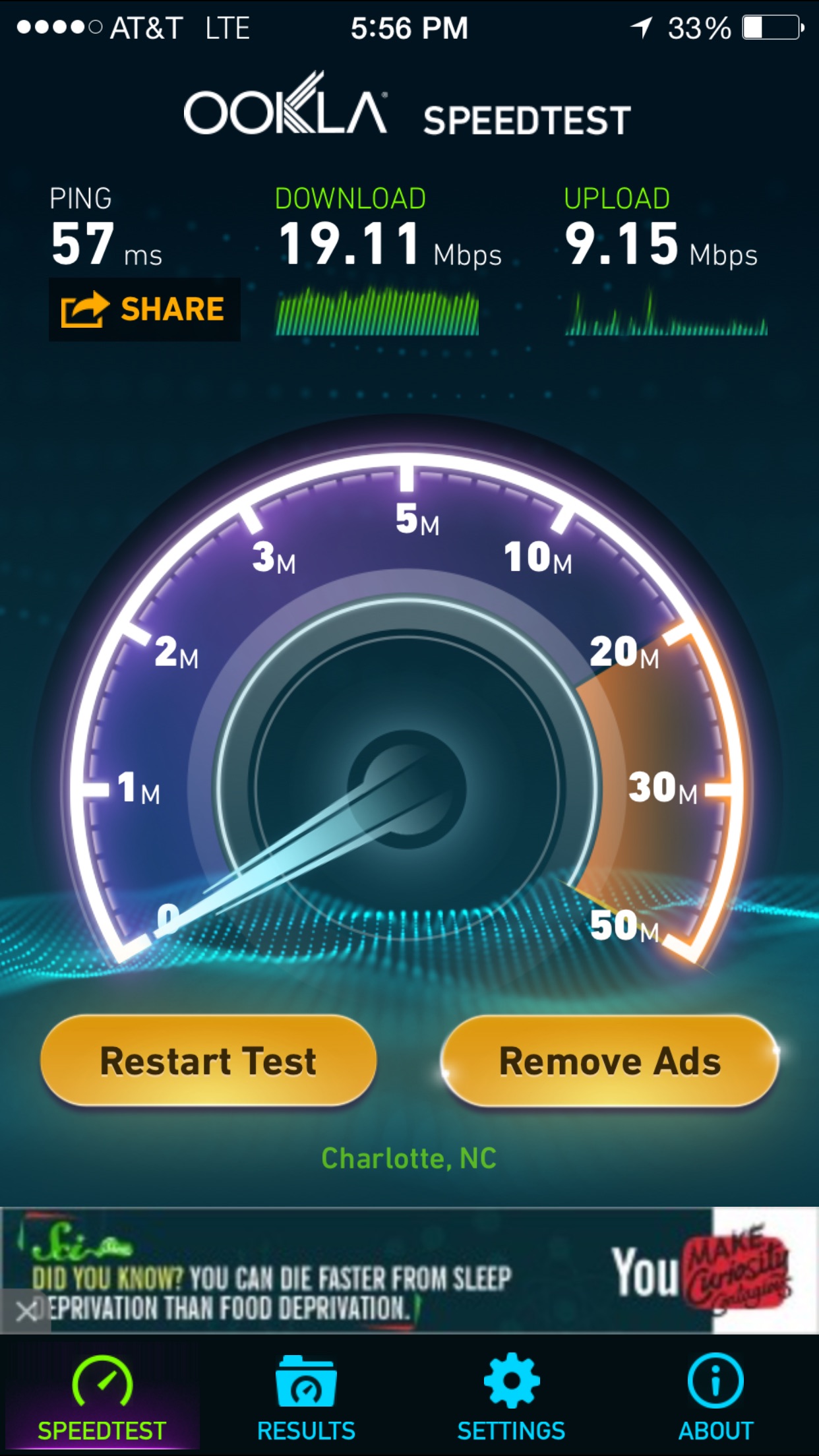 Speed test while connected to the AT&T Unite Pro Hotspot.

Next, I ran a speed test without connecting to the hotspot using the phone’s internal LTE. 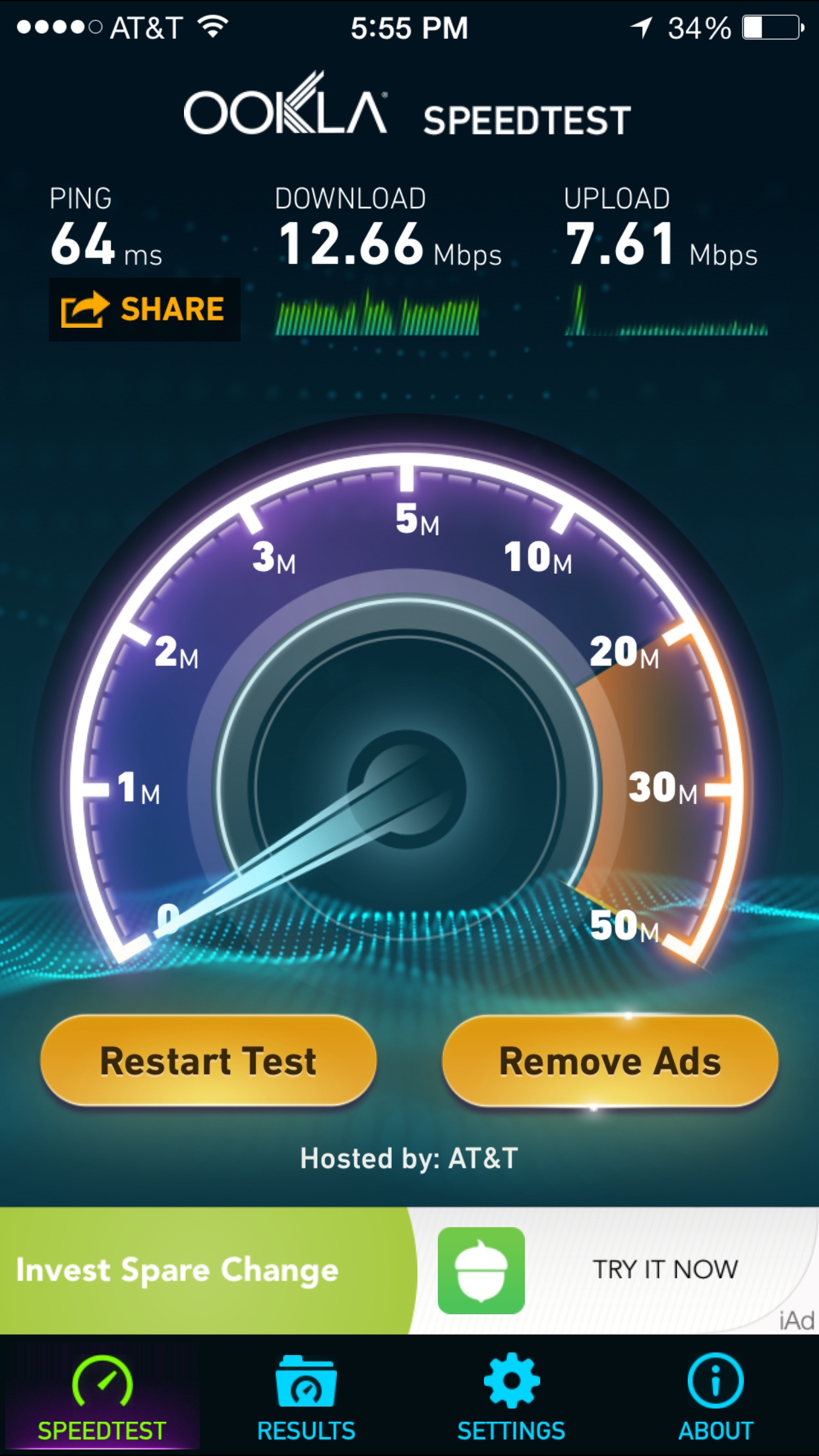 Finally, I tested the speed of the phone using my office Wi-Fi network, rated for 50Mbps from Charter, just for comparison. 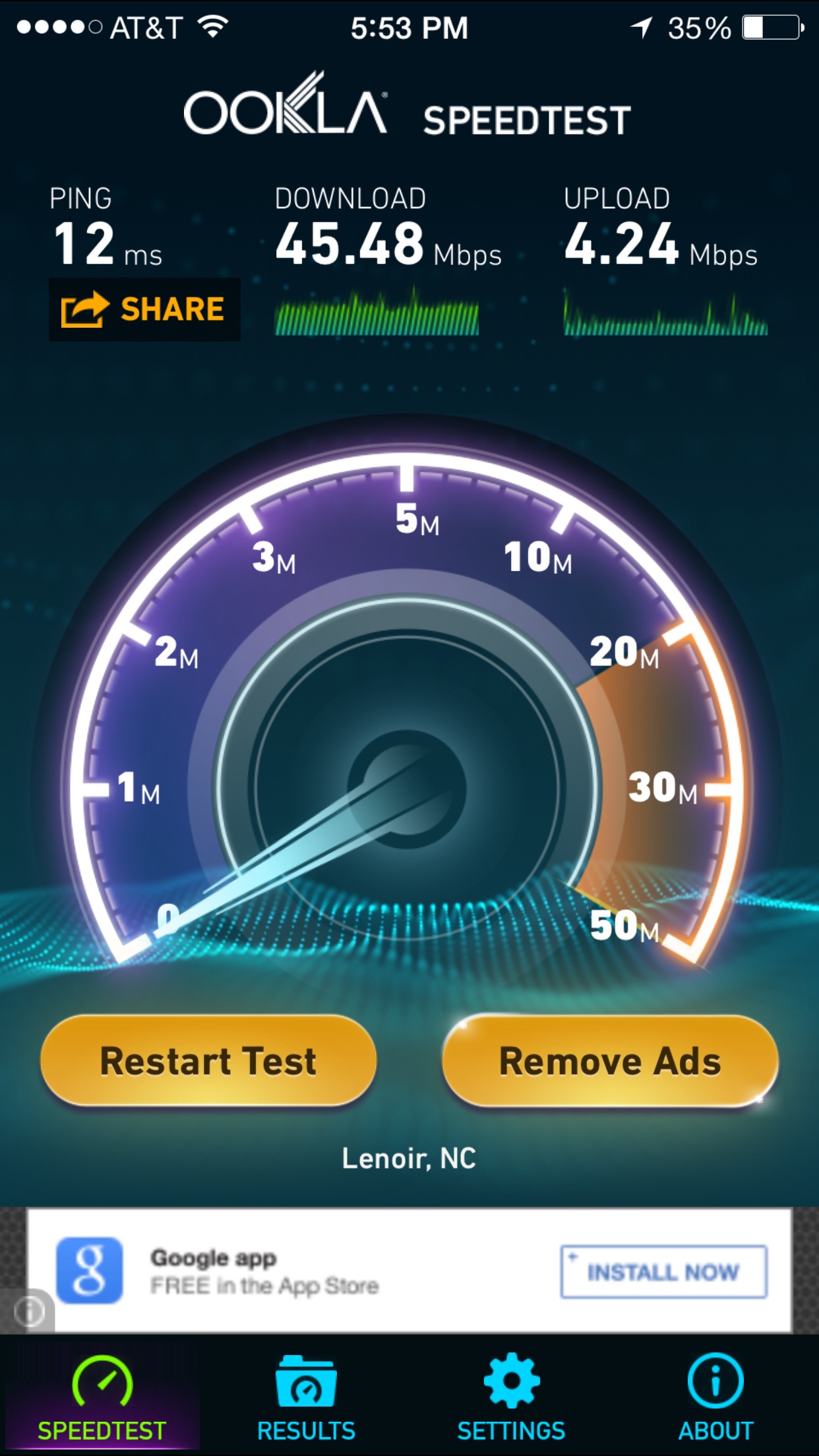 It’s hard to believe, but the AT&T Unite Pro Hotspot gave the fastest results between the two LTE speed tests. I tested it a few more times to confirm the results.

The hotspot didn’t offer the same results as a fast cable Internet connection connected to an 802.11ac router. Also, there’s a little latency, as the Ping results took longer on both straight LTE and through the Hotspot than they do over cable.

AT&T charges $49.99 for the AT&T Unite Pro Hotspot with a 2-year contract. Off-contract it costs $199.99. Since most modern smartphones include a hotspot feature, why would anyone incur this cost for a dedicated Hotspot? There are three reasons.

Business users who travel as a team will like the versatility. Families will enjoy the simplicity of an all-day connection while on a vacation. We gladly recommend the AT&T Unite Pro Hotspot for these kinds of users.