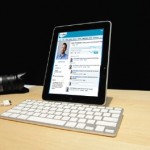 AT&T will soon begin selling iPads directly to businesses with discounted 3G data plans. AT&T will offer both Wi-Fi only and Wi-Fi + 3G versions of the iPad. Companies will be able to buy up 3G data plans in bulk, just like they do with BlackBerry smartphones.

As I mentioned earlier this week, more and more businesses are taking the iPad seriously. Thus far, companies have purchased iPads from Apple or let their employees bring them from home. This move may mean wider deployments at large companies.

iPads are becoming more and more common at large companies, where some users can access large data sets, CRM and ERP systems. Companies like Salesforce.com already build apps specifically for the iPad, while companies like SAP already have 1,500 iPads on the network.

This move may help Apple get even a bigger jump on the BlackBerry PlayBook. AT&T announced earlier today that it will be selling the iPad at its retail locations.