In just two hours you’ll be able to go to attwireless.com and pre-order the iPhone 6 and iPhone 6Plus, but for the next three hours the site is almost blank. While AT&T certainly has good intentions, this could lead to some confusion for those trying to find out if they’re eligible for an iPhone 6 upgrade.  If you do need to check your upgrade or account status there is an easy workaround.

The iPhone 6 and iPhone 6 Plus pre-order kicks off at midnight Pacific Daylight Time. Until then, attwireless.com is inaccessible and simply displays a countdown timer and text telling people that they’re a little earlier. There’s a background image of someone using a tablet on a sofa visiting a what attwireless.com used to look like. There’s also a tagline at the bottom of the splash page with the tagline “Mobilizing Your World.”Unfortunately, AT&T doesn’t redirect visitors anywhere else or provide any links to access their accounts. 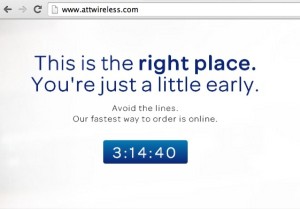 Those looking to access their AT&T accounts can avoid this useless splash page by going directly to ATT.com.  There they will find the  Web site and login areas they’re used to seeing. 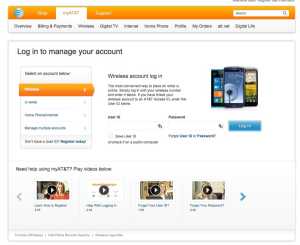 AT&T’s and other wireless carriers’ Web sites have had problems with accepting iPhone pre-orders in recent years. While it appears Apple.com and the carriers are trying to minimize pre-ordering issues, there’s no telling if they’ll be able to stand up to the pre-order rush. While Apple most certainly tried its best to stream the iPhone 6 announcement to Apple customers and partners worldwide, the video streaming servers were overloaded and much of the two-hour presentation was inaccessible to many.

If ATT.com, Apple.com or any other carriers’ sites are inaccessible at midnight, there are plenty of ways to still get the iPhone 6 or iPhone 6 Plus on September 19th. Read our list of iPhone 6 Pre-Order Tips here.

The iPhone 6 and iPhone 6 Plus are the first all-new iPhones since Apple introduced the iPhone 5 in 2012. Tomorrow is the first time Apple is releasing phones in different sizes. Apple executives are expecting this to be the biggest iPhone upgrade cycle in the history of the iPhone. That’s in part because the smartphone market’s grown tremendously since 2012 and many iPhone 5 users skipped the iPhone 5s since it was so similar to the phone that it already had.

The iPhone 6 features a 4.7″ display and the iPhone 6 Plus has a 5.5″ display. Both have improved camera sensors, faster processors and larger batteries. They’re both equipped with NFC technology that allows them to replace credit cards with Apple Pay.