Long gone are the days when your voicemails and text messages are tied to not just your mobile number, but to your mobile phone. Thanks to the advent of visual voicemail, popularized by Apple’s iPhone, and to Internet-based and VoIP services like Google Voice, your messages are now accessible whenever, wherever. AT&T is even taking it a step further thanks to the company’s Foundry innovations lab in Palo Alto, California with a new cloud-based messaging system so that messages can now be accessible on any phone, computer, or Internet-connected device. 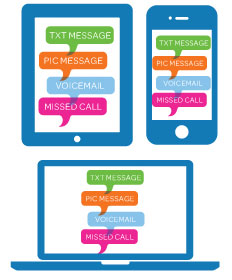 The system works in that your voicemail, text messages, MMS messages, and missed calls are now accessible from any device with an Internet connection, which is similar to the way that Google Voice works. The best part about the AT&T solution is that you can just use your mobile number that you have on AT&T and won’t need to go through the hassle of getting a Google Voice number or porting your existing number to Google Voice to use Google’s cloud-based paradigm for messaging. The other advantage that AT&T’s cloud messaging solution, called AT&T Messages, has over Google Voice is that the AT&T solution works with MMS messages for rich multimedia messages with voice, pictures, or videos–a feature that Google Voice lacks support.

For AT&T subscribers, an Android version of the app is now available through Android Market. The carrier says that it is working on an iOS version for iPhone users and tablet support will be coming later this fall.