And here is another take on the Internet Tablet or MID. The NVX3000PC (they’ve got the not so sexy naming convention down at least) from Audiovox/Jensen is described as a 7 inch Windows XP personal computer with built-in portable navigation and WiFi. From the product page it looks like it is targeted for the automobile. They are also touting the usual media playback with mp3 and video playback (well if it is running XP you’d expect that) as well as two USB ports, a full function remote control, and an included windshield bracket for mounting. All of that isn’t cheap as it will set you back $1500. 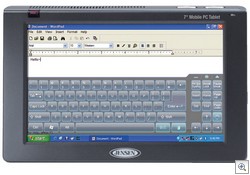