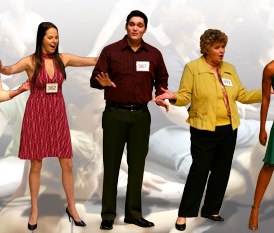 Tonight at Wayside Theatre we open a rock and roll party called Buddy: The Buddy Holly Story. Tomorrow I start a week of auditions. No rest for the wicked. Monday and Tuesday I’m in Washington DC for two days of auditions. I’ll see 200 or so actors in the company of about 30 other theatres. Then I’m off to Memphis for the UPTA conference. We and about 80 other theatres will see over 800 actors and interview about 200 of those for possible jobs.

Auditioning is a grueling process for everybody involved. Actors get a brief few minutes to show their wares and producers and casting folk get the same few minutes to decide if they want to see more or not. Quick note taking is a key and most folks have their own systems for doing so.

My process is really simple. If an actor fits what I’m looking for at a particular call I scribble a quick CB for call back on the resume and then scribble why I want to see them again. If they don’t fit the immediate openings, but are good enough to remember for later consideration, I scribble Keep on File and why. If they fall into the categories of boring, not good, or just meh, they get a NS for nothing special. (Unfortunately, most fall into that category.) That’s it. After an interview or call back I’ll take more extensive notes on the resume. Back home these resumes are sorted into color coded files.

While I’ve been using Tablet PCs for some time to cut down on the crazy glut of paperwork, there’s no escaping the fact that an actor’s calling card his his/her picture and resume. At the UPTA conference the organization is extensive and well done. They provide us with a sheet of paper that includes the actors’ vitals and a small picture, and then when we interview the actors we ask for their head shot. Typically the first gets stabled to the latter so we can hang on to any notes we’ve made. In DC we’ll just get the head shots. In today’s age of digital photography, it is already cheaper for actors to get head shots done and produced, but they still need tons of the things to distribute at these auditions. Remember they are a calling card. At auditions we hold here at our theatre, we actually ask for digital submissions rather than the conventional over the transom mail version if they are coming in ahead of time, but at the audition we still take the paper versions.

As we enter the “Year of the Tablet” I’d love to see someone smarter than I, take these devices, take these paper heavy audition submissions, and figure out a way to distribute the head shots digitally for large audition conferences. Actors usually have to submit their head shots to the organizing entity anyway, and this could be a digital solution. Most of us sit in an audition room with a computer in our lap or at our side anyway, (Macs usually dominate)  and it would be just as easy to make those notes on a digital head shot and resume as it is on paper. Then the entire mess could be filled in a digital database for easy retrieval, notes and all. I’m sure someone could design an app that flips through the pictures and head shots similarly to reading a book. But the Inking part would be key to its usefulness. Heck, done right, this could even work on an iPhone or iPod Touch.

I’ve tried doing this kind of audition note taking with portable scanners on a Tablet PC, but the process is just too cumbersome to allow for any efficiency. OneNote works great as a separate note taking application during interviews, as it allows for audio recording of the interviews as well. But notes on the Tablet are separate from notes on the resume. I’ve also used it to record video directly into the page of notes from the interview. I’ve tried using the Pulse Pen from Livescribe, but again, its not an efficient solution.

As I watch the iPad madness begin to turn into a different phase of speculation about what the real device, (and others that will come along) can actually do, I think this could be an excellent platform for such a solution, provided there is some Inking available. Of course that looks like it might have to be third party solution, but what I’m looking for here is a total third party solution anyway. HP’s new slate, that was unveiled at CES2010 briefly, also looks like a good size for this, but I’m guessing we won’t see Inking there either. I hope I”m wrong.

It would have to be pretty thorough application/hardware combination to make this work, but every day there are auditions happening somewhere in show biz with casting folk scribbling notes on resumes. In New York and LA it is an entire industry. The cost of those resumes to artists and casting folk is huge. You can imagine the trees that get killed. There is a market there in my opinion and I’m guessing a pretty lucrative one.

Maybe one day, we’ll see a solution for this on a Tablet. I sure hope so.

Other posts on this from the past (some pretty humorous.)