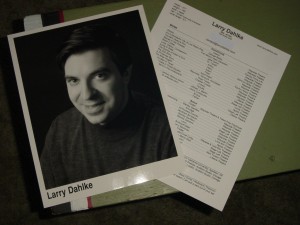 When the iPad was released I was one of those who didn’t buy the weeps and moans from those who felt the device needed a camera. That’s all spilt milk now. Without a doubt Apple is going to put a camera in the next edition of the iPad in order to make its FaceTime approach work across all of its devices, and also to keep up with the competition from other Tablet/Slates which will all have a cam era.

The form factor of the iPad with a camera just didn’t make sense to me, in much the same way that a 5 inch or a 7 inch Tablet/Slate doesn’t make much sense to me with telephony features. Call me a Scrooge when it comes to my thinking here. The devices are just too big to be used in that fashion. But today, as I begin a round of auditions for our annual Christmas production at Wayside Theatre, I’m rethinking those camera views.

Our annual Christmas production is filled with kids. This year we’re doing A Christmas Carol and we will see lots of candidates for Tiny Tim and his Cratchit brothers and sisters, as well as the plumb role of the Turkey Boy. We don’t make the same requirements of children who audition as we do professionals. The pros bring in a picture and a resume as a part of the game. So, we usually take a photo of the children and occasionally video as well to help us remember what they look like and how tall/short they may be. Height is an important casting consideration when it comes to filling out that Cratchit family.

My thinking goes like this. There are several good scanning Apps available for the iPhone. I could use an App to scan what comes in as a resume (or list of credits) with a camera on the iPad and also take a photo, having both to use for later reference when we’re making casting decisions. I could also take a bit of video if we need to. This would cut down somewhat on the clutter that is the paper trail, although I don’t think that will ever go away in an audition setting. Professional pictures and resumes just make too much sense when you’re reviewing them in the casting decision process. But then there are all those kids and the collection of photos and videos that we take. I’ve done similar things with a Tablet PC and cameras before but it always required importing the pictures or video into the computer. Theoretically this would be a one machine approach that is a little less wieldy.

I’m still not sold on the iPad as a big camera for every day use, but in this specific case I think it could offer a good solution.

Of course there are those other Tablet/Slates that are supposed to be going on sale any day now.