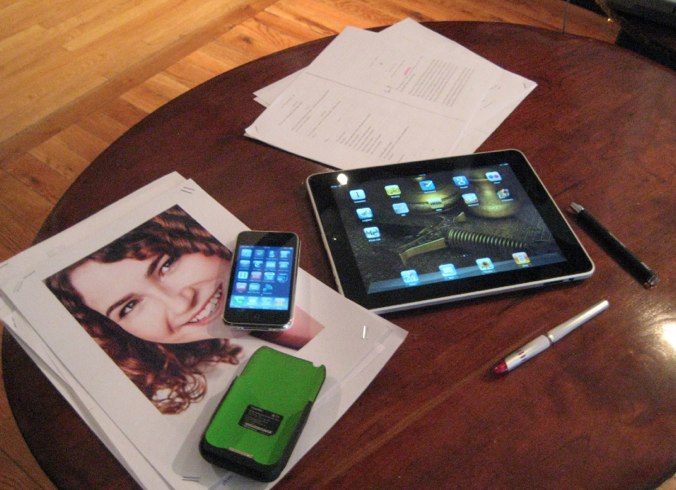 Yesterday I returned to my office after spending time with my ailing mother, and in addition to catching up on quite a bit of work, I had to attend local auditions at our theatre.

During that time I had both my iPad and my iPhone close at hand. I would occasionally flip on the iPad to check feeds, email, etc… but I noticed an interesting personal trend that I’m not sure is habit or just convenience. When I would take a break and leave the audition room I would grab my iPhone and not the iPad to check up on things. Again, this may just be habit. I’ve been using the iPhone as a mobile computer for quite sometime now, but I think there is an convenience factor there as well.

The iPad is obviously larger and requires two handed operation. I’ve become quite adept at one handed operation with the iPhone. It also slides nicely into a shirt or pants pocket. I think those two factors make it more of a “go to” device for gathering or communicating quick info, at least in my case.

It was also interesting to watch the actors during the “hello and goodbye” chit chat who commented on the iPad. Quite a few wanted to touch it or see it in action, and fortunately for them we weren’t heavily scheduled so I would give them a quick look when time allowed.

As a side note, for those who have been following the saga of my Mom’s health crisis, she is doing much better. She has left the hospital and is back at her long term care facility and for the moment still confounding her doctors. Thanks for all the prayers and good wishes. She’s going to continue to need them as we continue her journey and when I read those already given, she was quite touched and asked me to pass on her thanks as well.