Autumn Dynasty Review: A Great RTS for the iPad

With its large touchscreen, the iPad seems like the perfect platform for Real Time Strategy games, and Autumn Dynasty proves it, mostly.

Autumn Dynasty is an RTS iPad game with art that looks like tradition Chinese painting. The story involves quelling a rebellion while solving a mystery of shady noblemen. The story though,  just serves as a way to get the player from one mission to another, like most RTS games.

The traditional Chinese painting style means every battle looks like it takes place on a piece of parchment, and characters are reminiscent of Chinese calligraphy. The result is a beautiful game that really shines on the new iPad’s Retina Display. 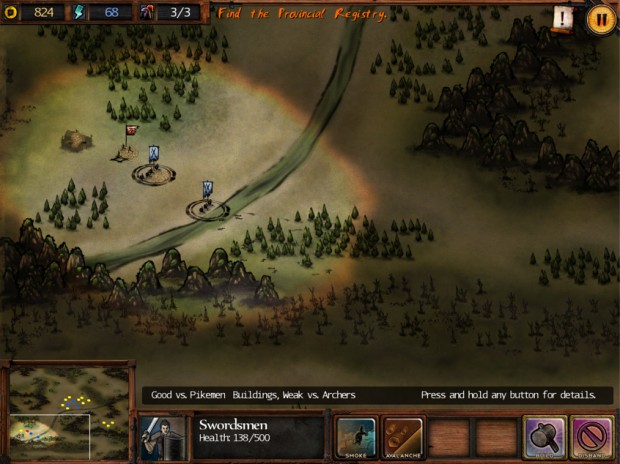 The missions are typically simple, usually making the player jump through a few hoops to destroy the enemy’s base. Those hoops might be archers hidden in trees taking potshots at units, catapults constantly firing on the only piece of open terrain, or enemy patrols that summon overwhelming force against the player.

Unlike PC RTS games, Autumn Dynasty doesn’t have a huge selection of units. In fact, it has only five units available: soldiers, pikemen, archers, horsemen, and catapults. Each unit has special abilities and they have a rock-paper-scissors relationship with other units. The result is a system that takes a few minutes to learn, but stays fun for long after those few minutes are over.

To guide single units, players simply tap them to select, then draw the route they have to follow. To select groups, draw a circle around them and then draw a route from one of units in the group. It’s a simple control method, but is frustrating when drawing a circle around a group accidentally results in drawing a circular route for a singe unit.

The game’s pathfinding could also use some work. Sometimes the game won’t recognize a route through a narrow pathway, choosing instead to direct units all the way around the nearby plateau or mountain. I also ran into a few moments when catapults would just stop dead in their tracks when commanded to bombard towers in an area on a plateau, but just moving them slightly fixed the problem.

The rest of the game, however, is stellar.

Some missions took me a long time for a mobile game (about 20 minutes) with the speed set to slow (which is the default), but they were fun throughout. There is multiplayer included in the game, but I haven’t had a chance to try it yet. Just the single-player campaign is enough for me at the moment, and it’s definitely worth the $5.