We first got news of this company when at CES this year where I did a quick standup interview with Derek Prentice of Azentek. Since then, we have stayed in touch with Azentek.  Well I recently got an email from Derek, outlining they’re new UMCP being released sometime in July.  This will be called the AxSS (pronounced “Access”).  Here is some text from Derek’s email: 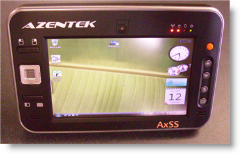 Hi Dennis,
I thought you might enjoy seeing a sneak peak at our latest UMPC that will be released in mid-July. It is called the AxSS (Pronounced ““AccessÃ¢â‚¬Â) .

We had a very cool custom rear seat mount made from our friends at PanaVise for a rear seat entertainment offering. Official retail pricing has not been set Ã¢â‚¬” but it looks like it will be around $999. 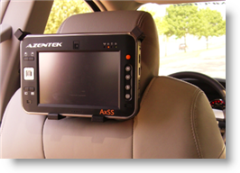 We expect to get an eval unit in the next month or so, and will do a full demo then.  Stay tuned for more info.