iOS 6.1 bugs such as bad battery life, poor reception and busted auto-brightness are leading some users to ask if they can go back to iOS 6 or hoping for a swift update to iOS 6.1.1.

In extreme cases, we are seeing bad battery life on iOS 6.1 that drains the battery to almost 50% in less than six hours.

Based on reports of bad iOS 6.1 battery life, cell signal issues and an auto-brightness feature that doesn’t work as well as it did on earlier version of iOS, Apple could have spent a little more time working on the iOS 6.1 update before release.

While iOS 6.1 on the iPhone 5 performed well in our initial tests, the iOS 6.1 bugs appear to be affecting devices differently

The biggest issue for iOS 6.1 is the bad battery life that is impacting the iPhone 5, iPhone 4S, iPad mini and other devices. 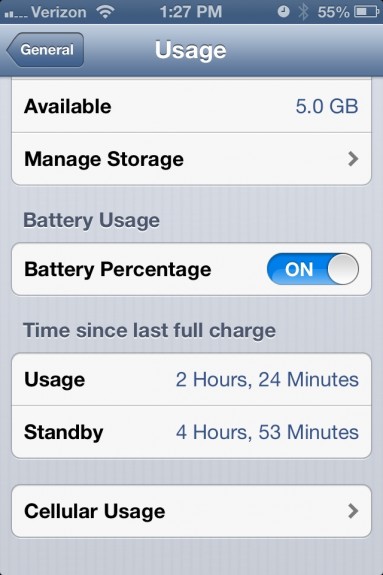 Several members of the Gotta Be Mobile team are experiencing bad battery life on iOS 6.1. Below are the observations from several team members.

@gottabemobile my battery drains faster than before, not even 20 hours lasting me iphone 5

Other users saw iOS 6.1 battery life improve on their devices, and in our iOS 6.1 review Editor Adam Mills did not notice a change.

There are a numerous reports of bad iOS 6.1 battery life on the Apple Support Forums. Some users are reporting that bad battery life on iOS 6.1 is solved by backing up their iPhone and performing a restore.

We are also hearing reports of sub-par singla strength on iOS 6.1, with users saying that the 3G signal is worse on iOS 6.1. Reports on Apple’s Support Forums don’t single out one carrier or device, but we’ve heard that the AT&T iPhone is experiencing signal issues for at least one reader.

@josh_smith cell signal , AT&T . It gives me edge in places I use to have full bars of HSPA+. And sometimes it says NO SIGNAL. Where I have.

Another iOS 6.1 bug appears to be a broken auto-brightness setting. On the iPhone 5, the auto brightness feature is not dimming the screen correctly after the iOS 6.1 update. This bug is not present on all of the Gotta Be Mobile team member’s iPhone 5’s, but it may be the cause of bad iOS 6.1 battery life for some users.