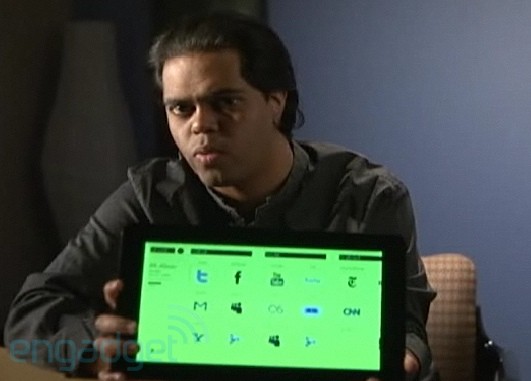 Well,Â  the Internet Tablet formerly known as the Crunchpad is now heading to market powered only by Fusion Garage, the company that Michael Arrington’s TechCrunch was partnering with. In a press conference today, Fusion Garage CEO Chandra Rathakrishnan tried to make clear his vision of why the split happened and also pump up the noise about the device, which is now christened the JooJoo.

First, about the device: The JooJoo will be priced at $499. It is WiFi only, it will be available for pre-order on December 11 and shipping will be 8-10 weeks after that. The JooJoo boots into a browser supposedly in 9 seconds.Â  It has a 12.1 inch form factor with a capacitive touch screen and has a 4GB SSD. The user interface contains icons that take you to the various websites. There is a caching ability that allows you to (for example) do email when you aren’t connected and then sync up when you are. Fusion Garage is emphatically saying this is not a Tablet.

From what I’m seeing on the Twitter backchannel, most of the pundits are calling it a Fail at this early point. I am too. $500 for a single tasking device? I’m not buying, but then I was always skeptical about the Crunchpad concept from the get go, even at Arrington’s hoped for lower price point.

Now for the legal divorce stuff. Rathakrishnan says there never was a contract between the two companies (TechCrunch and FusionGarage), that FusionGarage took all the risk and put up the costs and that Arrington was responsible for the marketing. He also says Arrington did not deliver on his promises.The quote from that side of the story is “Fusion Garage was the only doer in this story.”

All in all the story just got a bit weirder and leaves more to play out. I have to say this though. In naming the not-a-tablet the JooJoo, Fusion Garage is attempting to cast a spell claiming that JooJoo means magic. Well, I’m thinking this entire episode of this device is filled with some bad JooJoo and this will never fly. (And as pointed out by Sascha Segan, the African word for magic is juju not JooJoo.)