Ballmer Only Gets Half a Bonus Due to Mobile Challenges 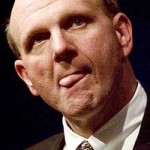 Microsoft has a lot of catching up to do in the mobile space and the company’s board of directors decided to give CEO Steve Ballmer a kick in the rear…sort of. The board gave Ballmer only half of his expected salary, cutting a check for just $670,000. The reason he didn’t get the entire $1.34 million? In Microsoft’s annual proxy filing, the board cited the KIN phone failure, WinMo’s sliding market share and not pursing innovations to take advantage of new form factors.

There’s no argument that Microsoft needs to buckle down when it comes to competing in the mobile ecosystem, but I don’t think witholding $670,000 from Ballmer is going to have any measurable effect in Redmond. That sum might get a lot of people’s attention, but it’s a blip on the radar to someone who’s worth over $10 billion. To put that in perspective, that’s like not paying for someone’s bagel and coffee that has $100,000 in the bank.

Ballmer’s big incentive is to increase the value of Microsoft’s shares as he owns nearly five percent of the company.