Steve Ballmer spoke today in Washington DC at the Microsoft Worldwide Partner Conference and said that Microsoft is “hardcore” on Tablets, having a range of Windows 7 Tablets. A user reported his remarks to Business Insider along with the snapshot of the screenshot below that lists Tablet Partners Microsoft is working with.

The talk was mostly about Cloud services, but it sounds like Ballmer is going to start beating the Tablet drum saying that Windows 7 slates will start appearing this year. Of course it will take more than words and cheerleading to make this happen. I still remember an MVP keynote when Ballmer took notes on a piece of paper wishing I could have asked him why he didn’t use a Tablet PC at that point. 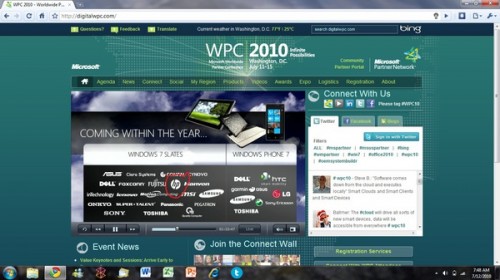